Quebec Pledges Consumers Will Get Travel Refunds For COVID Cancellations 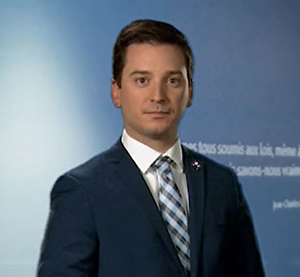 Simon Jolin-Barrette, Quebec’s Minister of Justice and minister responsible for the province’s Office of Consumer Protection.

Quebec’s minister responsible for consumer protection, Simon Jolin-Barrette, has made a sweeping promise to ensure the province’s consumers get travel refunds for bookings made prior to the pandemic.

Jolin-Barrette said all players -- whether it's airlines, insurance companies or credit companies -- will have to honour their commitments if the service has not been provided, Canadian Press reports.

While studying the office's budgetary appropriations, Jolin-Barrette, also the Minister of Justice, concluded that travel industry players were passing the buck to each other to avoid paying.

It is a statement that those who understand the industry’s dynamics would likely find simplistic, at best and irresponsible at worst, as the revenue collected by tour operators is held in trust until such time as the consumer chooses to travel.

“Companies are giving consumers the runaround in order to not provide refunds,” said Jolin-Barrette, adding that even in the case of a plane ticket purchased from Air Canada, a federally regulated business, Quebec had the power to intervene based on the province's Compensation Fund for Customers of Travel Agents.

“The legal framework must be improved. I want to assure Quebec consumers they will not lose the money they paid for vacations for their families or for themselves," he said, pledging to solve the issue as quickly as possible.

“Everyone should have to pay what they have to pay,” he said, adding he was preparing a “global” solution that would cover “consumer contracts.”

Similarly to TICO, the Quebec consumer protection fund only protects consumers who purchase services through a travel agency that holds a licence. However, funding is provided by consumers rather than travel agents.

Whether the provincial government intends to enforce the commitment to consumers by attempting to compel airlines and tour operators to provide refunds, or by leveraging the protection fund, is unclear.

Gabrielle - August 21, 2020 @ 14:09
“The Runaround”? What an obnoxious thing to say. Not surprising that he has no understanding of money or business as he’s from Quebec. The province with no understanding of money or business. But interesting that he’s in justice when all he has to do is look at the Force Majeure clause on almost all tickets and bookings. Frankly, no company was required to do anything, so in the interest of customer service, travel companies are doing the best they can without going out of business.

*Just an FYI; why I can say Quebec has no understanding of finances - money or business...
*Globe and Mail 2018 for 2019/20.
Quebec will receive $13.1-billion in equalization payments next year – a $1.4-billion increase. Stephanie - August 20, 2020 @ 18:25
Politician trying to please his voter. John - August 20, 2020 @ 17:17
Good luck with that Simon Nicole - August 20, 2020 @ 15:17
These reservations were cancelled by the operators ONLY because of government actions. These operators are in a tough spot, unable to operate due to the government & not enough cash to refund. If the government wants refunds to consumers, they should bail out the operators or pay the refunds themselves. We are past 5 months without revenue. Where is the money going to come from? Catherine - August 20, 2020 @ 13:34
Given his statement..."Jolin-Barrette said all players -- whether it's airlines, insurance companies or credit companies -- will have to honour their commitments if the service has not been provided, Canadian Press reports." What about the travel agent who has honoured their commitment to the customer by providing our services....what about the commission recalls that will happen when refunds are done....how is that protecting the agent in this case?