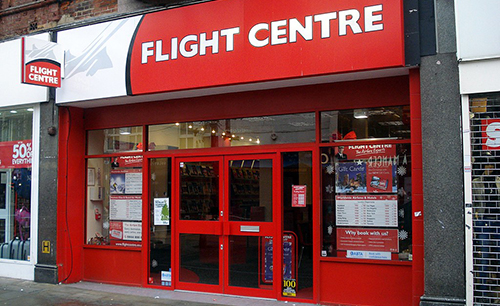 Open Jaw has learned that Flight Centre permanently let go approximately 600 staff in Canada yesterday and only nine physical shops will remain in the country. The move is in response to the crippling effects of the COVID-19 pandemic on travel.

Flight Centre Travel Group's Allison Wallace, VP, Corporate Communication & CSR, The Americas told Open Jaw the layoffs were a "very painful step" that was taken as a last resort. She noted there is not enough demand for the company to remain at its present size. It was a crucial step in ensuring Flight Centre makes it to the other side of the pandemic, she said.

"We now realize meaningful travel recovery is going to take much longer than originally expected and it simply isn’t feasible to retain our full workforce, or even our present reduced workforce," Wallace told Open Jaw in an email.

"What it means is that we had to further cut costs and that even more people had to be laid off or let go. This was an extremely difficult decision that Flight Centre treated with the utmost seriousness. It is extremely painful for all of us to let our team members go."

The company tapped into Ottawa's wage subsidy program, CEWS, as it "vigorously" pursued financial assistance from the federal government to preserve jobs, Wallace said, but that lifeline proved to be a "short-term solution."

"Most Challenging Period In 40-Year History"

Flight Centre announced yesterday it is also closing an additional 91 stores in Australia, leaving it with 2,000 employees across 332 stores, website and call centres, according to BusinessInsider. However, around 60 of these stores will remain closed over the next six to 12 months as heavy travel restrictions remain.

The company had already announced the closure of 100 stores in MAR, and in AUG revealed that 70% of its 20,000 workers globally were either put on stand down, furloughed, or made redundant, BI reports.

Flight Centre’s Australian managing director, James Kavanagh, said the past six months had been the most challenging period in the company’s 40 years in business.

“Never before had we imagined – let alone faced – a scenario whereby all discretionary travel would be halted for a prolonged period,” he said in a statement.

“Fortunately, we took steps early to secure our long-term future and to ensure we could survive for an extended period in a very low-revenue environment, although we have still been forced to make some very tough decisions.”

Last month, FCTG posted a loss of AUD$510 million (CA$485 million) for its 2020 Fiscal Year. Despite the loss, the company said it remains optimistic about its corporate brands FCM Travel Solutions and Corporate Traveller, which both landed a record amount of new business and a pipeline of potential opportunities.