TDC's Adamo: It's A Question Of When, Not If Travel Will Rebound
Agency's first-ever national virtual conference welcomes 1,000 travel professionals 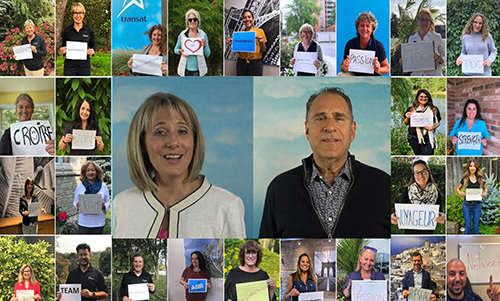 Throughout the conference, agents could network with suppliers and each other, as well as with members of TDC's management team, including Director General Louise Fecteau and President Joseph Adamo – in a lighthearted, pixelated game theme, complete with a surprise appearance by Mario himself. (Mario was, in fact, a client of travel agent-extraordinaire, Tommy Transat. In a traditional 8-bit game emceed by Nicole Bursey, Commercial Director for Transat Tours Canada, Tommy had to navitage Transat's policies and procedures – from OptionFlex to Transat’s Traveller Care -- to beat his opponents and win the hearts of his customers.)

"Due to the pandemic, we have experienced a lot of stress and emotions in the last few months. To lift our spirits, we have given a playful touch to this year's team with our Pacman-Mario Bros icon leading the way," said TDC Director General, Louise Fecteau. 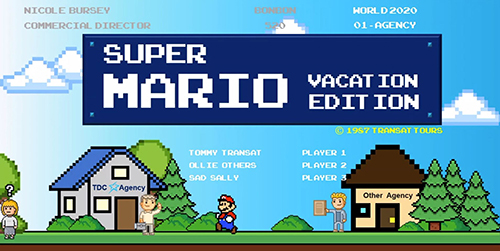 The "Ready. Set. Go." theme for the event set the tone for an eventual rebound of the travel industry.

"The desire to travel, this need for human contact and discovery, is present in each of us and will never be stifled. For more people, it is dormant today, but no one can predict exactly when it will re-emerge."

To be ready for the eventual – but certain – restart of travel sales, he advised agents to participate in webinars to keep their skills fresh and keep in touch with customers.

The pandemic has wrought havoc on the travel industry, but if there's a silver lining to be gleaned, it's that it has brought to light the many benefits of using a travel advisor, and ultimately strengthened the TDC family, said Fecteau.

TDC is developing a comprehensive marketing campaign that focuses on the value of travel professionals, which Fecteau said will make it the first network of travel agencies to do so.

"If you remember, this was my promise at the regional conference last year. The pandemic put the project on hold, but there could not be a better time to deliver the goods, finally. More than ever, we are able to demonstrate to your customers why you are essential," she said.

"At the same time, the campaign will act as an information vehicle for all the customers who may have booked their trips alone and, in many cases, experienced incredible frustration because no one was there to help them in this unprecedented situation."

Attending the conference were also five of TDC's brand new preferred partners, all Canada-focused, signed by the agency within the past four months: CanaDream, Fresh Tracks Canada, La Forfaiterie, GVQ Travel and the most recent, HVN. They join TDC's other established partners such as Transat, Air Canada Vacations, Tours Chanteclerc, TravelBrands and WestJet.

"One of the elements that came out from almost all of these exchanges is the value of the travel professionals as we know it, and has taken on a whole new meaning through the testimonials of many travellers since March. I think the entire industry has realized it, and TDC intends to build on this in the near future," Fecteau noted in a news release.

"It's when we go through times of such adversity that we realize the strength of working together, in the same direction, while being able to draw on the resources of our colleagues that makes all the difference. This is the strength of a network, the strength of TDC, and this is the message we wanted to convey to our members at this meeting. We are there for them, whether it is the team at our head office or all their colleagues from across Canada."

"It may seem repetitive but unfortunately, I don't have new information to share on that front. Of course, the situation we are currently going through, as you can well imagine, has delayed the original schedule," he said.

"What I can tell you is that things are moving forward. Canadian and European regulatory authorities are studying the details of the transaction, and its impact and, in all likelihood, a clearer picture should emerge by Christmas."