Freeland Working On Aid For Airlines; Carriers Cool To Ownership 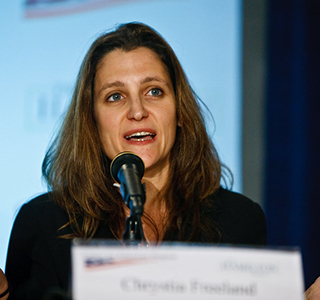 Finance Minister Chrystia Freeland said on Tuesday the government is very aware of the current challenges facing airlines and is working on possible aid. What that support looks like is pending, but experts say a government stake in airlines, one of the several prospects being floated, is far from the best course of action.

Earlier this week, Open Jaw reported that Intergovernmental Affairs Minister Dominic Leblanc said Ottawa is "very much discussing" taking a stake in Canadian airlines as it considers how to help the sector.

Robert Kokonis, president of AirTrav Inc, told FinancialPost airlines need the government to provide access to low-interest loan guarantees and putting more money into rapid testing at airports. Mike McNaney, CEO of the National Airlines Council of Canada, the trade association representing Canada's largest passenger airlines, calls for measures that include sector-specific liquidity, with an approach that recognizes “recovery is going to be a multi-year process and ensures government financial terms reflect the potential lengthy downturn in industry revenue,” according to TheBramptonGuardian.

"God, no, we don't need a stake in airlines. The cost controls would be incredible," said John McKenna, president of the Air Transport Association of Canada, in a CanadianPress article. The trade organization represents some 30 regional airlines in the country.

Lisa Kampis, a CUPE union representative with Sunwing in Montreal, said airlines cannot continue to survive “without some form of financial sustainability package,” but rejected suggestions that Ottawa should take an ownership stake.

Karl Moore, a McGill University professor and airline expert, told iPolitics the Canadian government acting as a “silent partner,” and buying a non-controlling stake in an airline, would be “a reasonable thing", but anything more would be detrimental to the business.

“Governments are good at (running) some things – airlines are not one of them,” Moore said.

Another issue brought up by John McKenna, president of the Air Transport Association of Canada, which represents regional carriers, is that a government stake in a large airline would be unfair to other, smaller players, including Porter.

“The government needs to support not one airline; it needs to support a whole bunch of airlines that offer regional service,” McKenna told iPolitics, adding the idea did not come from the aviation sector. “This is something out of the blue that no one has ever talked about.”

Kokonis sums it up saying that while the government taking a stake in Canadian airlines wouldn't be his first preference, "it certainly is better than seeing what it took decades to build in this country fall apart in a matter of months."

Leonard Sanicharan - October 22, 2020 @ 14:33
we need hon. Deputy Prime minister/Govt not only to help the Airlines we need direct help from the Govt to help owners of travel agency . Travel agencies are directly impacted by the Lalita Sanichara - October 22, 2020 @ 11:59
Travel Agencies need help from the Govt. Agencies are directly impacted by Covid19. Not only airlines need a bail out, travel agencies do also. Craig Petroskey - October 21, 2020 @ 13:36
I sincerely doubt whether any Canadian airline would look too fondly at a government representative on the board of directors. It would be scary for the board to have to possibly consider specific actions proposed by that Government Appointed board member, especially for those actions which may have ideological or political goals in mind. Beware of the government bureaucrat who shows up at your door and says, "I'm from the government...I'm here to help."