Ottawa Working Out Details Of Airline Relief Package; Announcement Could Come In NOV 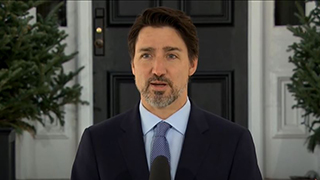 Despite the urgency of a bailout for the airlines, which are bleeding cash and hampered by travel restrictions, Prime Minister Justin Trudeau said his government is still mulling over the details of an aid package, Bloomberg reports.

“There are certain industries that are harder hit than others because of this pandemic. Travel and tourism is certainly one of them,” Trudeau said, promising he’d work “to ensure that we’re going to have a strong airline industry coming back.”

Some observers say the statement of support is eight months too late as overall industry recovery will now be that much more challenging not only for the airline sector, but for tour operators and the large network of small businesses driven by travel advisors.

According toThe Globe and Mail, support could come in the form of low-interest loans and rollbacks of airport fee increases. The aid package could be announced in a budget update expected next month.

Canada's largest airlines have made efforts to cut costs to survive the coronavirus pandemic, including eliminating unprofitable routes and shedding workers. Service to Atlantic Canada in particular has been cut drastically by both WestJet and Air Canada’s regional subsidiary, Air Canada Express. This could prompt the government to attach strings to any funding, according to sources speaking with the Globe.

“My largest preoccupation is always going to be for Canadians themselves, for workers and for people in rural and remote -- and not even so rural and remote regions, like Atlantic Canada -- that are seeing significant reductions in airline service,” Trudeau said.

Another stipulation under consideration is that government funding not be used to compensate airline executives, the Globe reports, citing several anonymous sources.

Industry leaders have long been pressing the federal government to deliver a sector-specific aid package for airlines, or at least loosen the border restrictions for travel. Back in MAR, former Finance Minister Bill Morneau promised rapid relief for airlines and other hard-hit sectors, but the government has yet to act on that commitment.

Leonard - October 26, 2020 @ 13:48
Owners of travel agencies need direct government help since the industry business is halted due to the pandemic