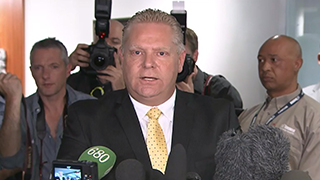 Photo by HiMY SYeD / photopia
is licensed under CC BY 2.0.

The rapid testing pilot project at YYC could prove to be pivotal for air travel in Canada, as Ontario Premier Doug Ford says a similar program could be implemented at YYZ if the trial in Calgary proves successful.

The hope, of course, is to find a work around the current 14-day quarantine for arrivals in Canada that is crippling travel and impacting cross-border business.

As Open Jaw has reported, the program at YYC will see international travellers receive a rapid test for coronavirus upon arrival and reduce the mandatory quarantine if a negative test result is received. The pilot project, a collaboration between the Government of Canada and the Government of Alberta, launches 02NOV and participation is voluntary.

“I always like looking around the world and taking the best ideas from everywhere, no matter if it’s in Alberta or other regions in the world, and we have to learn what works and what doesn’t work,” Premier Ford said during a press conference Tuesday afternoon, according to a report by GlobalNews.

“What I do like out in Alberta, and I talked to the deputy prime minister on Sunday about this, is Calgary airport.”

Ford said if the pilot project is successful, international travellers coming to Toronto should have the option of reducing their quarantine time if they are willing to get tested.

Ford first commented on the Alberta pilot project after it was announced last week, saying he would be "open to it," CP24 reported.

However, he cautioned that “Toronto is much different than Calgary" and made clear he would need to wait for the results of the study before commissioning a similar program in Ontario.

Marcy Desroches - October 29, 2020 @ 11:17
Precisely! Calgary doesn't get the volume or the diversification so why on earth is the pilot happening there?? It makes no sense.