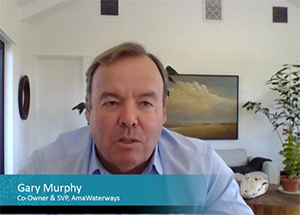 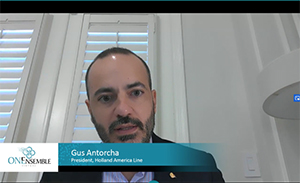 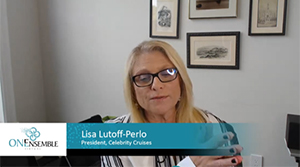 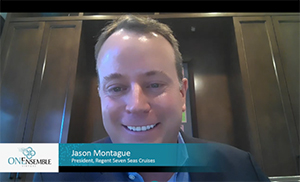 It’s the 60-thousand-dollar question, one that’s been asked every time a cruise line senior executive has shown up on a virtual forum since March.

When will we cruise again?

Coming after the CDC lifted its No Sail Order, and reports that not one, but two new vaccines are proving even more effective than expected, Ensemble members might have received the most definitive answers yet.

“I think vaccines are a game changer,” affirmed Celebrity’s Lutoff-Perlo, who tantalizingly revealed, “There’s light at the end of the tunnel.”

3 Essential Ingredients to a Comeback

Regent’s Montague concurred, reinforcing a months-long message from all the cruise lines. “Health is our top priority,” he said, “We’re not going to sail until we’re ready.”

And he reiterated, “Health and safety is not a competitive advantage,” describing the unprecedented collaboration between cruise companies to find a post-COVID path for all lines to return to cruising.

“We’ve seen nothing like it in the travel industry,” agreed Holland America’s Antorcha.  He also believes a cruise industry united in standard approaches to health protocols builds confidence with cruisers.

“I think that’ll give guests comfort that their safety comes first.”

Lutoff-Perlo reminded advisors there is another factor to a cruise comeback. “It has to be safe to sail - and we need to be able to take people places they want to go.”

And HAL’s Antorcha pointed out that, “Guests also now need certainty of timeline.”

In a significant omission that highlights the difficulties in meeting CDC’s new requirements to sail from U.S. ports quickly, the panel skipped over any reference to cruising in the Caribbean this winter.

Instead, the Ready, Set, Sail panel focused on whether to expect a full season of European cruising beginning early in the second quarter.

AmaWaterways sailed a series of river cruises this summer and fall, and a number of Europe-based ocean cruise lines also sailed the Med without incident. Those successful cruises set precedents with EU authorities and informed cruise lines’ own operations and planning.


“Health and safety
is not a competitive advantage.”

As a result, Murphy has, “fingers crossed we’ll re-launch at our usual time in April.” And he hopes it will get easier. “Right now, different states make up their own rules,” but, “they’ll soon be universal,” and then, “We’ll be operating under EU-wide protocols.”

That’s of course if one big condition is met. “Americans have to be able to travel to Europe.”

“I’m optimistic we’ll be back,” in the Med this summer, says Montague, confirming that’s where Regent’s Splendor, delivered just before the pandemic, is scheduled for her (new) inaugural season.

In addition to Europe, Holland America is also, “committed to launching Alaska” in the summer of 2021, he added.

And Lutoff-Perlo confirmed Celebrity has no changes to its planned itineraries in Europe in 2021 either.

Making the Best of a Bad Situation

“Every day I wake up and look for the silver lining,” in how COVID has changed the cruise travel world, admits Celebrity’s Lutoff-Perlo.

“There’s so much pent-up demand out there,” said Montague, “Something that’s positive for all cruise lines and travel advisors.”

He cited two examples just for Regent:  record bookings when they launched 2023’s world cruise, and “the highest booking day in Regent’s history” when they released 2022-23 sailings. “That’s amazing.”

AmaWaterways is seeing the same interest. It launched a series of virtual cruise presentations - something they’d never done before. “And we got 35-thousand potential new travellers. More people are interested in river cruising than ever before,” said Murphy.

That’s giving the river cruise line the confidence to increase capacity nearly 25% - with a focus on the North American market.

On its part, “We’ve really looked hard at how we operate,” says Holland America’s Antorcha, “we’ve learned how to become much leaner.”

And he feels the industry benefits from a new spirit of unity. “We’re all going through this together – including travel advisors and crew and all of us.”

“Our team has asked itself, ‘How do we re-emerge stronger?’” said Lutoff-Perlo, citing a review of deployment, pricing, and how the Celebrity brand can refine its positioning straddling the luxury category in bigger ways. One of the results of that intensive review was the line’s new ‘Always Included’ pricing.

“We’ve engaged with the travel advisor community and we focus on success.”

And all panellists agreed with Murphy’s final advice to advisors, “Now really is the best time to engage with consumers,” to tap into the pent-up demand and take advantage of new products and pricing that are available to book travellers who really are: Ready… to Set Sail.