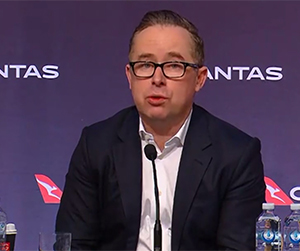 Anti-vaxxers need not pack their bags. If the CEO of Qantas is right, COVID vaccination will become a new requirement of carriage around the world.

Even before any COVID vaccine has been approved, the airline executive has come out saying only those who have proof of immunization will be flying – at least on his airline.

In an interview Monday on Australian TV, Qantas CEO Alan Joyce reportedly became the first global airline executive to declare, “We are looking at changing our terms and conditions to say that, for international travellers, we will ask people to have a vaccination before they get on the aircraft,” he revealed.

“Whether you need that domestically, we will have to see with Covid-19 and the market but certainly, for international visitors… and people leaving the country, we think that's a necessity.”

Australia’s COVID-related travel and border policies are already among the strictest in the world, including an almost-complete ban on both inbound and outbound international travel and severe restrictions on domestic travel. That’s credited with helping the country contain the pandemic more successfully than many other countries.

“Unfortunately with the levels of the virus in the United States and in Europe, we’re not going to see operations to those destinations in any real strength until we see a vaccine being rolled out… likely towards the end of 2021,” he said.

Other industry executives and observers are hoping for an earlier positive impact from vaccinations. But when vaccines do become available, Joyce thinks they are likely to become a standard requirement, and not just for Australians.

"I think that's going to be a common thing talking to my colleagues in other airlines around the globe," said Joyce.

A New Kind of Passport

“What we are looking at is how you can have a vaccination passport, an electronic version of it, that certifies what the vaccine is, is it acceptable to the country you are traveling to."

In the same interview, Joyce said creating a vaccination passport for travellers both to and from Australia would essentially have to be a global system requiring international government collaboration.

As has previously been noted in OpenJaw, proof of vaccination as a travel requirement -  to certain destinations - is not new. But not on this global scale.

But since news of Joyce’s interview came out, also came word that IATA has taken the initiative to develop its own ‘Travel Pass” to help support the travel industry’s recovery. IATA’s app displays not only proof of vaccination, but also COVID test results, verifying pax’ COVID-free status and even linking to a digitized version of their passport. It starts testing with Qantas’ oneworld alliance partner British Airways within the coming weeks.

No airline in Canada has yet announced vaccination as a condition of carriage. But it seems likely that, as the vaccinations currently being tested are rolled out to broader populations, travel suppliers will follow Qantas’ suit.

So travellers could be looking at acquiring a second passport  -or, if successfully tested, the IATA app - when they make plans to travel. One that proves to border guards, airlines, cruise lines, even hotels… that the bearer is vaccinated against, and tests negative for COVID-19.

Don - November 25, 2020 @ 10:07
No proof of vaccination then you are subject to the quarantine protocols of that destination. Sandra Petroutsa - November 24, 2020 @ 18:28
Ridiculous! Making having a vaccine mandatory to fly is Big Brother. No one should be forced to get a vaccine for a virus that has a 99.96% survival rate. What happens when the virus makes a person sick? A virus that was pushed through this fast could have side effects we won't know of for a while. Wait until people refuse and the airlines go bankrupt. Bryan Alison - November 24, 2020 @ 15:56
There is no vaccine that will be up-to-date for Covid19, because like the flu, Covid morphs. The death rate from Covid is miniscule, and the recovery rate is outstanding. There are excellent treatments for it also, so a vaccine is not what is needed. Additionally, mandatory vaccination is a death warrant for some, whose immune systems are already compromised. So Mr. Joyce, before you make the final decision on what your airline will require, please gather the facts on Covid and stop listening to agencies like the CDC, which has dozens of patents on vaccines and makes money from promoting vaccines. Kudos to Nicole McTague! Rita Ropponen - November 24, 2020 @ 15:31
I agree with Nicole McTague 100%. This is totally wrong. NIcole McTague - November 24, 2020 @ 13:25
Mandatory vaccination, as the only way to travel, is egregious & should not be supported. TB kills more people every year & mandatory vaccination has never even been considered.

I know, this will not be published, as nothing negative ever is.