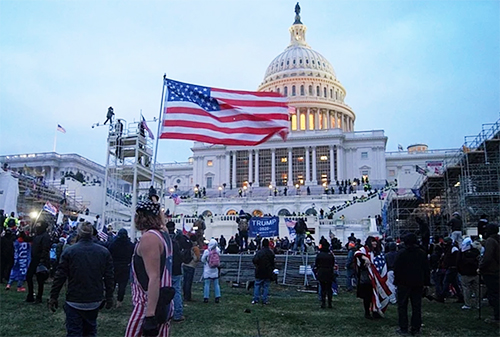 Photo by Tyler Merbler via Wikimedia under the
Creative Commons Attribution 2.0 Generic license.

The chaos in Washington D.C. Wednesday prompted several travel leaders to speak out publicly against the violence, condemning the actions of the mob as being anti-democratic and un-American.

Ensemble Travel Group CEO David Harris said he rarely broadcasts something that may be considered strongly political, but was compelled to write a note to his staff in light of the unprecedented events that transpired in the American capital, which many have blamed on the inflammatory rhetoric delivered by President Donald Trump since losing the election.

"At what point is enough enough? At what point must something be done to preserve democracy and the safety of the world's most successful nation?" wrote Harris adding that waiting until January 20 was not a viable option and instead urged lawmakers to invoke the 25th amendment to remove Trump from office.

"It is not my intent to offend anyone nor is this a partisan view, this is simply me stating the obvious and it is something that everyone in America must be aware of - I encourage everyone to share their views with their elected representatives and beyond."

Skift collected reaction from several CEOs such as Ed Bastian of Delta Air Lines who said “peaceful protest has been a powerful force for change throughout U.S. history. But it must never cross the line into violence and insurrection.”

Arne Sorenson, Marriott CEO, acknowledged to Skift that Americans have different views on the results of the country's recent election and their brands serve a wide range of customers with an equally wide range of opinions, but said "what we can’t do is trample the Constitution; we can’t use violence and terror to force an agenda. It’s not who we are – and I would offer, it’s not what the vast majority of Americans want.”

Many observers wondered at the level of pushback by law enforcement during Wednesday's events compared to previous protests that were part of the Black Lives Matter movement.

Scott Kirby, United Airlines CEO, and Bret Hart, United Airlines President, were angered and saddened by the rioting and vandalism in Washington, but were hopeful that the nation can turn the page and look toward a better future.

"There was also another series of events that took place overnight that gives us hope: both houses of Congress re-assembled after the riots, certified — on a bipartisan basis — the results of our Electoral College and formalized the election of Joseph R. Biden Jr. and Kamala D. Harris as our next President and Vice President of the United States," they told Skift.

On Thursday, Brand USA postponed its Focus On Canada virtual conference, which was to take place 13-14JAN, 2021.

"We remain focused exclusively on keeping the U.S. travel industry connected with the global travel community and ensuring our country is top of mind among travellers. We will be in touch shortly to provide new dates once they are set. We look forward to connecting with you when the time is right, as we look ahead to building the future of travel to the U.S." the destination marketing organization said in a statement.

Suzanne Marcus - January 8, 2021 @ 13:35
Mark
did you find out it was planned. less police turned out for this than for the BLM protest and it was video'd by someone and I just viewed this: