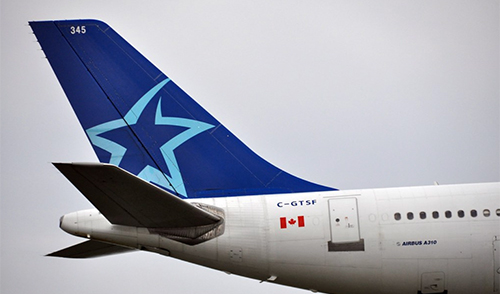 "Air Transat Airbus A310 C-GTSF" by abdallahh is licensed under CC BY 2.0.

Transat AT has publicly rejected an unsolicited takeover bid from Quebec businessman Pierre Karl Péladeau as the company waits for regulatory approval of its sale to Air Canada.

"We continue to believe that Air Canada's proposal continues to be the best option for Transat's future, especially in the context of the pandemic and its devastating effect on airlines," said Mr. Jean-Yves Leblanc, president of the special committee of the Board of Directors of Transat.

In a statement, Transat said Péladeau's investment firm, Gestion MTRHP Inc., proposed a bid of $5.00 per share, and not $6.00 as was widely reported. The proposal lacks binding, fully committed financing or evidence of sufficient cash on hand for the purpose of making the acquisition, Transat said, and also lacks financing to support Transat's 2021 working capital requirements of approximately $500 million.

"This offer, without demonstrated committed financing, appears designed to attempt to adversely influence the regulatory approval process by suggesting that an alternative exists, should the regulatory authorities choose to reject the arrangement between Transat and Air Canada," Leblanc said.

Canada's new Minister of Transport, Omar Alghabra, was sworn in on 13JAN. He will have to contend with several issues facing the airline industry in the coming weeks, including determining whether to approve Air Canada’s purchase of travel and tour company Transat A.T.

According to YahooFinance, Garneau reiterated last week that the government was following the transaction carefully, and while he did not disclose when a decision would be made, he said it would be based on the public interest.

When asked about whether Alghabra’s appointment could potentially delay a decision on the Transat purchase, the minister said his aim is “not to delay anything", but added, "We need to be diligent, we need to be thoughtful, we need to be considerate. I know a lot of work has been done by Minister Garneau, and I’m looking forward to continuing to build on that work.”

The acquisition, which was initially slated to close at the end of 2020, still requires approval by regulators in Canada and the European Union.

In an opinion piece published in the Globe and Mail, Konrad Yakabuski says Transat's takeover by AC would eliminate consumer choice on a slew of transatlantic and Caribbean flights, and potentially lead to a hefty increase in ticket prices if demand rebounds after the pandemic. But it would also, he points out, ensure that Transat ends up in the hands of an experienced operator and preserve hundreds of jobs at the struggling carrier.

The Quebecor chief has never run an airline. His only link to the transportation sector is his recent purchase of a bankrupt Montreal electric taxi venture that had tried and failed to take on Uber, Yakabuski says.

More than 90 per cent of Transat shareholders voted in AUG 2019 to approve the Air Canada deal, including the carrier’s largest shareholder, Montreal-based investment firm Letko, Brosseau & Associates Inc., which holds a 13.7 per cent stake.