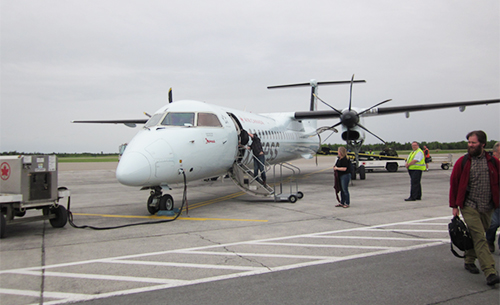 In his first day on the job, Canada’s new Transport Minister Omar Alghabra learned that Air Canada will reduce flights by about 25 per cent in the first quarter, resulting in about 1,900 lost jobs. Despite stepping into what one observer called “an existential crisis”, the minister wasn’t ready to offer any direct support to the country’s struggling airline industry.

Alghabra’s spokesperson Allison St-Jean told The Toronto Star “we are disappointed by airlines’ decisions to cancel more regional routes,” adding that Ottawa is “developing a package of assistance” for the industry, but repeated Ottawa’s line that before they receive any aid, airlines must refund passengers for flights cancelled during the pandemic, they must restore air connections that have been cut to the country’s smaller communities and that they remain key customers of Canada’s aerospace industry.

In the same story, National Airlines Council of Canada president Mike McNaney said he has heard about an aid package for months, but has not seen Ottawa offer anything concrete for the sector.

The union representing over 4,100 flight attendants at WestJet, WestJet Encore and Swoop hoped the appointment of the new minister would provide a new perspective and a fresh attitude towards evaluating the industry and its national economic significance. WestJet announced last week that it was cutting nearly 1,000 positions, blaming the decision on government policies like quarantining and pre-flight COVID testing, which have slashed demand for travel.

"Canada’s civil aviation sector has suffered one of the most significant impacts and fallout from the COVID-19 coronavirus and associated global pandemic" said Chris Rauenbusch, President of Canadian Union of Public Employees Local 4070 in a press release. "As a direct result of the many vague and ever-changing regulatory requirements from the government, every one of Canada’s airlines is suffering losses well beyond any crisis ever contended with, and to no avail from our government to date."

It’s not just airline workers that are affected by the cuts, but also smaller Canadian communities have lost their only air connections to the rest of the country. As cities like Fredericton, Yellowknife, Prince Rupert and Kamloops were added to a longer list of small communities to where Air Canada will no longer fly, some wondered in a CBC report if vulnerable regional economies are being used as a bargaining chip to force the government's hand to provide sector-specific financial aid to the airlines.

Following news of Air Canada’s suspension of all passenger flights to her city, Kamloops-Thompson Conservative MP Cathy McLeod told Kamloops This Week the federal government needs to do more to aid the airline industry.

“The federal government promised support for the industry. They’ve made a promise but they haven’t followed through,” said McLeod.

The reduction of air traffic during the pandemic has also affected the air traffic control company Nav Canada and the new cuts look to worsen the situation. Nav Canada's CEO Neil Wilson told the Canadian Press the company saw a "staggering" decline in flights over the past year due to fallout from COVID-19, resulting in massive layoffs and revenue shortfalls. Air traffic dropped by more than a third in the fiscal year ended 31AUG. The drop in travel demand prompted the company to lay off about 900 employees -- more than 17 per cent of its workforce.

And it’s not just Canada’s airlines that are cutting service. SimpleFlying reports that current worldwide capacity is almost half of what it was in JAN 2020, according to aviation analyst OAG, which warns the worst is yet to come. With increasingly restrictive travel policies rolling out worldwide, OAG predicts a further 350 million seats could be removed from schedules by MAR.

While most in the industry are calling on a financial bailout for the country’s airlines, one observer thinks the answer is to renationalize them. RankandFile.ca editor Gerard Di Trolio thinks the pandemic has exposed terminal defects in Canada’s deregulated, privately owned airline industry.

In an op-ed in JacobinMag, he writes that nationalization is the best way to make air travel viable, environmentally sustainable, and in tune with social needs. Without an overhaul, he says airlines "will continue to treat their workers poorly and pump out carbon emissions while failing to serve communities like Atlantic Canada."

John Van Dyk - January 22, 2021 @ 16:45
"they must restore air connections that have been cut to the country’s smaller communities" . How can the government demand this of the airlines on the one hand and then on the other hand tell people that they shouldn't travel. What a mess