Canadians Debate the Necessity of New Travel Restrictions. Where Do You Stand? 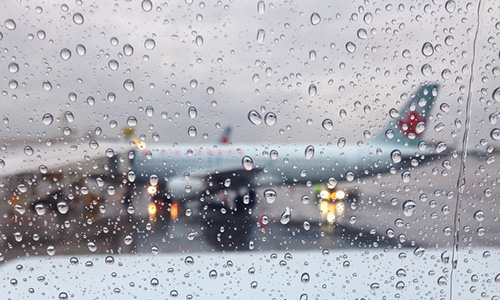 Photo by Laura Lefurgey-Smith via Unsplash

During a CBC interview Sunday, Foreign Affairs Minister Marc Garneau repeatedly said that "all options are on the table" to limit non-essential travel as the federal government looks at ways to limit the spread of COVID-19 in Canada, including the possibility of invoking the Emergency Measures Act.

While Ottawa considers its options, Canadians have been debating what exactly constitutes non-essential travel and whether more restrictions are necessary or even legal.

CBC’s Cross-Canada Checkup radio program Sunday sought opinions from experts with different points of view of travel and members of the travel industry about what Canada should, or shouldn’t, do next.

Open Jaw President Nina Slawek was among those who appeared on the program. “My position is against a travel ban,” she told host Ian Hanomansing. “We want to limit spreading COVID, but there is absolutely no data to prove that travel is a super spreader. So much of this is based on assumptions and anecdotes.”

Slawek cited examples of COVID testing at Calgary and Vancouver airports that tracked as few as one per cent of travellers testing positive at YYC and none at all at YVR.

She also stressed that travel bans have had a tremendous negative impact, not just on airlines, but on the many ancillary businesses surrounding them and the travel industry as a whole.

“This is affecting people being able to feed their families,” said Slawek. “There are issues around bankruptcy for so many tour operators and yet the government is saying ‘don't travel’. They're not actually banning it, they're saying ‘don't, it's not a good idea. But, travel, sorry, you take care of yourself, even though you're bleeding like crazy’.”

One of the workers directly affected by the ongoing restrictions on travel is Dominic Lavoie. He is one of the thousands of flight attendants who have been laid off. He wouldn’t say whether he supports a non-essential travel ban, but said he thinks airlines are actually doing a good job of keeping passengers safe from COVID.

“As flight attendants, we’re all looking forward to seeing our passengers on board again. We want everything to go back to normal just like everybody else but that's a decision that really has to be made by government officials, by health experts and by scientists.”

“I think that an airplane is basically one of the safest places you can be aside from being in your own home right now,” added Lavoie.

Simon Fraser University professor Kelley Lee, who is one of a team of international researchers who studied the effectiveness of travel bans during the early stages of the pandemic, also shared her thoughts with Cross-Canada Checkup listeners.

Lee said their research found that when it comes to travel bans, timing matters the most and those governments that acted quickly a year ago were more effective at limiting COVID spread. Early testing and quarantine measures also helped if they were enacted quickly.

Another important variable, said Lee, was geography. The size of a country and its location in the world and how many points of entry made a difference. It helped if the country was an island and she noted that Canada’s long borders and vast size make it more difficult to enact travel measures.

Lee also stated that “travel bans” and “border closures” were misleading terms as no nation has completely closed its borders or banned travel. Rather, the debate is over what is non-essential travel and what is essential, she said.

“I do think we need to get non-essential travel down to near zero at this time and the reason is that new variants are circulating globally,” said Lee. You can’t just restrict travel to where they are, they are global. There are many of them and they are circulating worldwide. We have a short time window to hopefully prevent them from coming into Canada. They are already here so we also have to look at domestic travel.”

One of the biggest arguments against travel restrictions is that they could violate Canada’s Charter of Rights which guarantee mobility of Canadians and the right to enter and leave the country, but Robert Leckie, the Dean of The Faculty of Law at McGill University, said constitutional rights are never absolute and we accept limits on rights and such limits are valid on rights if they're reasonable and justifiable.

“The question here is whether a travel ban introduced by the government would be justifiable  and reasonable and I think there's a very good chance it could be,” Leckie told the CBC. “We’re living with all kinds of restrictions on rights of various kinds at the moment because of the pandemic and it could well be, given the urgency of the situation, that a travel ban could be reasonable.”

Where do you stand on the idea of increasing restrictions on non-essential travel now? Share your comments below.

Gloria Wiebe - January 25, 2021 @ 14:50
I am so amazed at the reaction Covid 19 has had. it seems as there has never been a disease in the world. The world is full of disease just as harmful as Covid 19 and travel was never shut down. There were precautions but not to this extent. They make you believe if you get Covid you automatically drop dead. Many people have had Covid with no symtoms at all. I believe the entire thing is political. Other countries have provided monetary support for their airlines. Those airlines could by up market share in Canada. I wish they would. Sad situation. The travel industry had done everything to keep everyone safe and followed all the rules and regulations and still no relief. Shirley Lewis - January 25, 2021 @ 13:41
My perception of this covid pandemic, is the government keeps malls and restaurants open. Where there are way more people breathing in the same air space. Travellers on planes are being tested now . They count is way lower than o ground level . So if there going to stop travel . It should be closing malls . Start food deliveries are only pick up . Not fare to point at one area of cause. The spread is more amongst communities. Airports have stepped up their safety measures . Thank you for the information as I travel to warm places cause of my arthritis is bad in winter months in Canada . Glen - January 25, 2021 @ 13:13
There are no rights during a pandemic! Our industry has been prob the most hard hit but it will come back....I am appalled with people still travelling and not taking into account the risks and the risk they pose to fellow Canadians.....SHUT DOWN all air space, SHUT DOWN all travel, even between provinces and between municipalities....Our PM and Premiers need to grow some "eggs" and stand up to this "holier-than-though" "I'm offended" attitude. People have become far too soft and even our govenment is scared to offend....which is crap. I could tell you the sky is blue and someone will be offended. Back during other pandemics, travel was not an option as it should not be now.....people need to understand, being a citizen is not a right but a privilege!!! You want this virus to stop then STOP TRAVELLING and STAY HOME!!!! I'm hurting in my travel business, we are barely hanging on, but understand, this is what is needed now.....Follow NZ and AUS with their style lockdowns....install a national curfew....do whatever measure necessary even if it involves force.