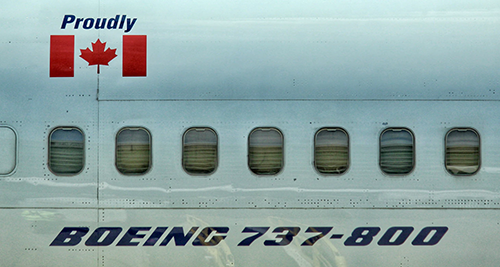 Photo by Jacob Mathers via Unsplash

“We’re now going on eleven months since this pandemic began in Canada and airlines aren’t going to last forever,” said Rauenbusch. “Eleven months in and we’re being convened to have this discussion.”

Unions representing airline workers have been appealing for relief since the start of the pandemic in MAR 2020.

Rauenbusch told the transport committee that the longer this drags out, the more “frightening to our members who may not have an industry to go back to.”

Jerry Dias, national president of Unifor, said: “You can’t miss the forest for the trees. This is about preserving the industry.”

Unifor represents 16,000 members in the sector which include pilots, air traffic controllers, mechanics and service agents, according to Dias. Right now, 45 per cent of Unifor’s members in the airline sector are either laid-off, furloughed or have had their jobs eliminated, he said in a statement issued Wednesday. At Air Canada 60 per cent are out of work. At Porter and Sunwing, all of Unifor’s members are furloughed or inactive.

“It is a devastating blow for a sector that previously employed roughly 240,000 workers and contributed nearly $37 billion in Canada’s Gross Domestic Product. It's a vital part of Canada's trade in goods and services and a key linchpin in the tourism industry,” Dias said in the statement.

“Airlines have drastically cut back on their routes, and even shuttered some locations – leaving entire communities with no flights at all, and diminishing hope that they will ever return. Without government action now to save the industry, those fears are well-founded.”

Chris Bittle, MP for St. Catharines, Ont., reiterated during the committee meeting the federal government’s condition that any funding subsidy should address issues such as airline executives’ pay, disclosure of airlines’ books and financial compensation to travellers whose flights were cancelled due to the pandemic.

In a recent editorial about airline refunds, WestJet’s Angela Avery, Executive Vice-President, General Counsel and Corporate Secretary, points out that in jurisdictions like the UK, the European Union and the U.S., where governments mandated refunds, the sector had been provided some measure of financial support. Canada remains the exception where no sector-specific funding has yet been provided to the aviation industry.

IATA is also sounding the alarm over airlines’ dire financial status, warning that countries will have to dig deeper over the coming months to support struggling carriers.

The industry was hopeful the vaccine roll-out would kickstart travel early this year, but as more contagious variants of the virus emerge, countries continue to tighten travel restrictions.

“The short-term outlook has certainly darkened. The critical time will be the summer season, because that is when airlines make most of their money. We are hoping this is the dark before the dawn,” said IATA chief economist Brian Pearce during a briefing covered by Flight Global.

“But if the summer season is endangered, there will be a clear need for more cash to keep airlines alive.”

IATA estimates governments have provided almost US$200 billion of cash to help keep airlines “on life support.” Rather than provide sector-specific aid, Canada has subsidized wages and offered loans.