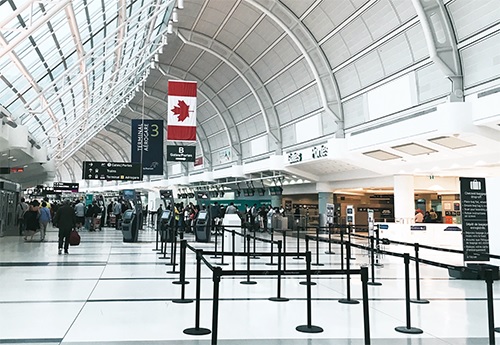 Photo by H W via Unsplash

As of Monday, the first international pax at YYZ were tested for COVID-19 under Ontario’s new mandatory testing plan to curb the spread of new variants of the coronavirus, but some experts question whether it is worth the effort.

“The variants are already here,” Dr. Sumon Chakrabarti, an infectious disease specialist at Trillium Health Partners, told the CBC. “We should look to see where it is going to cause the most damage. Essential workplaces, where we’re seeing the most transmission, congregate living settings, long-term care, this is where we should be focusing our attention.”

Ontario introduced the program in anticipation of a similar mandatory testing policy announced by Prime Minister Justin Trudeau last week, which has not yet taken effect.

The difference between the province’s and the federal government’s plans is that Ottawa’s includes mandatory hotel quarantines. That new requirement will see international travellers tested upon arrival to Canada, then quarantined for three days in a government-designated hotel at their expense. Those who test negative can self-quarantine at home for the rest of their 14-day isolation period. Positive passengers will have to transfer to a government quarantine facility.

While no date has been officially set, federal Transport Minister Omar Alghabra has said it could be as early as 04FEB.

In a press conference Tuesday, Trudeau said the rules, once in effect, would remain as long as necessary.

Ontario had introduced a voluntary testing program earlier in January. Since the launch of the pilot program, more than 6,800 tests were collected. Only 2.26 per cent were positive.

Ottawa also announced an ‘agreement’ with the country’s airlines last week to not fly to sun destinations in the Caribbean and Mexico until 30APR as an effort to curb travel during the spring break period, but observers have noted that Canadians can still fly to those places  via American carriers. They can also fly to other warm-weather destinations like Florida, California and Arizona.

"We assume the government is also engaging foreign operators on this issue to ensure we are all taking the same concerted approach," Mike McNaney, president and CEO of the National Airlines Council of Canada, told CTV.

McNaney said that airlines have been pushing for arrivals testing since last March, as a means of safely permitting travel.  He says there needs to be a recovery plan for airlines and that includes liquidity support, and a way to get customers back in the air based on science and safety. He thinks that rapid antigen testing needs to be a part of that.

“We have said from the outset that a combination of testing and shorter quarantines would be much more effective in managing COVID-19 and protecting communities than 14-day quarantines and other blanket travel restrictions for everyone,” Air Canada spokesperson Peter Fitzpatrick told the Toronto Star.

If the government’s aim was to scare people from travelling, they seem to be taking effect. On the first full day of mandatory testing at Pearson, only 1,600 passengers were tested, just enough to fill four jumbo jets.