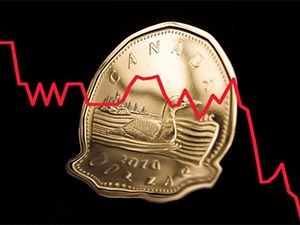 Trading at around 81¢ U.S. at yesterday’s close, the Canadian dollar has fallen a long way in a short time. The loonie is now trading at its lowest level vs. the greenback in 6 years.

There’s little question that this is bad news for U.S. destinations wooing Canadian travellers, but how is it impacting the broader travel market? Open Jaw polled several travel industry members to find out.

“At the moment we're not seeing a significant slowdown but that could change with the loonie continuing to decline - and if the decline is sustained,” says Allison Wallace, Director, Media & Communications for Flight Centre Canada. “While we don't expect to see people not travelling we do expect them to look for more value. We expect to see more people booking all-inclusives as it's easier to control their budget, as well as looking to Europe given the CAD vs the Euro is not as bad. We'll also likely see a decline to U.S. destinations.”

At yesterday’s Globus family of brands partner luncheon in Toronto, President & CEO Scott Nisbet says they are seeing Canadians capitalize on the fact that the CAD is faring quite well against the falling euro and that air fares are not going up. Europe bookings are strong and they expect that pattern to continue for summer 2015.

Deana Murphy, V.P. Retail Sales for Sunwing Vacations, says there has been no slowdown in bookings. In fact, she’s seeing the opposite. “Sales are getting stronger each week of January and I think we can thank the frigid temperatures for that and perhaps the savings at the gas pumps we are experiencing.”

Murphy also says that the Canadian addiction to all-inclusive winter getaways is tough to shake. “For the most part they know what their holiday will cost before they go so there are no surprises and exchange rates affect them less. When there is economic uncertainty in the market we find some consumers may make travel plans a little closer to departure, however a sun holiday for many Canadians has become a necessity so they will travel.”

In his position as Vice President, Sales & Marketing for Softvoyage, Dan Langevin has access to booking patterns of the many operators that use Softvoyage systems and booking engines. He says bookings are up almost 10% year-over-year. “2015 started slow but we are seeing record days now. The mood is extremely positive.” Langevin says sales are up across the board, from east to west. He acknowledges that “very aggressive pricing” is helping to drive sales.

This is CanJet Vacations’ 1st winter of selling sun packages, and V.P. Sales & Marketing John Kirk says Canadians are getting great deals. “Actually this winter may very well be a great time to get away to the Caribbean or Mexico. Our prices are set for this winter season and we do not anticipate any further U.S. currency surcharges being imposed. The truth of the matter is that given the bulk of our product is all-inclusive the cash component for spending in destination is really quite low, we think that is a pretty good thing for Canadians looking to escape this winter.”

Denise Heffron, ‎V.P. National Sales & Commercial for Transat, laughed at the question. “Is the low dollar affecting bookings? In a word, no. It’s January! The phones are ringing off the hook!” Heffron says sales patterns are very similar to last year, with even flights to Florida doing well despite the fact that the loonie has dropped about 10¢ since this time last year. “It helps that pricing is very competitive,” says Heffron. “You can have a nice vacation for $1,000. What’s not to like about that?”

Front-line retailers report that the dollar is having an impact on travel to the U.S., but ITC South packages are still flying off the shelves.

“The demand is still there,” says Francine Patterson of Maritime Travel, Moncton. “Obviously if they’re going to the U.S. there is an impact and I’ve noticed there is more hesitation there but not to the Caribbean. They’re still going to the U.S. but it is a little bit harder to sell… when you’re talking about an exchange rate that’s that high it makes a big difference.”

Bruce Fernandes, with YTB Travel Network in Mississauga, is also seeing changes. “I found that instead of going to the U.S. or Mexico, clients are now going to Cuba and D.R. They are changing their patterns."

Matthew Gordon of Goliger's Travel Plus in Waterloo says he is able to avoid the worst of the exchange issue by dealing with companies that sell in CAD. “For example, a pricing package with Disney is marketed in U.S. dollars but when I go through a wholesaler like Transat or Holiday House the pricing is cheaper.”

But Gordon sees more sticker shock in the future. “The price changes from day to day. All of a sudden a trip that I quoted 2 days ago has jumped $50 because of the dollar drop and then we lose the sale.”