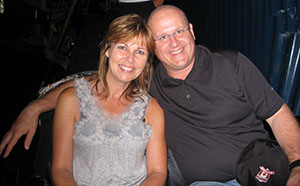 Valentine’s Day is tomorrow! If you don’t have the red roses ordered; reservations for a very special dinner; some flimsy lingerie bought and wrapped – or at least made the requisite Hallmark purchase... get on it!

All week we have been celebrating the most romantic day of the year chatting to Canadian couples who work together in the industry and still love it – and each other!

Familiar to many agents and key players in the industry, Doug Patterson is President of Trafalgar Tours and his wife Lori Patterson is BDM for Eastern Canada Holland America Line & Seabourn. (They said it was very typical that they’d have to chat by conference call, Doug being on the road in Ottawa and Lori working from their Toronto home that day.)

How did you meet? (They both laugh) Lori: I was working at CAA in Calgary and Doug had taken the President’s job at Insight. He came for an office visit in 1996, saying “I’ll take 10 minutes of your time,” and left 90 minutes later – it was an instant connection. But we didn’t see each other for a year after that. Doug: I remembered thinking, “Lori is sooooo my type!” A year later we saw each other at a golf tournament and then every time at AMA meetings we‘d end up talking for hours. Later that year ACTA was held in Toronto which is where we had our 1st kiss. John McKenna was there leaning up against a post in the hotel lobby and he saw us kissing and burst into applause!

When did you get married? Lori: We had a long distance romance for the next 10 months or so and it eventually made more sense for me to come here, so I moved to Toronto in 1999 and we got married in 2002. Doug: It was a great wedding – very non-traditional. We got married in Lori’s parents’ apple orchard in the Okanagan. Salmon, steak and chicken were served and everyone barbecued their own food. Local wine and later, cigars under the stars.

Where did you go on your honeymoon? Lori : We decided we didn’t want to use our passports or pack so we went houseboating on Shuswap Lake for a week. There was a hot tub and fabulous stereo system on the boat - it was a good time.

What’s the most romantic destination you’ve travelled to? Doug: Because of what happened I’ve got to say Quebec City. Lori: Yes! Doug: We extended a business trip to Quebec City by 1 night and shortly thereafter found out we were pregnant. Lori: Bermuda was a great trip too. Italy, Ireland, the Crane Hotel in Barbados - we’ve had some amazing vacations.

Do you recommend marrying someone who works in the same industry as you do? Lori: (laughs) I don’t know that we’d recommend it, or say anything bad about it either necessarily.

What are the pros? Lori: There are a lot of advantages in that we know the trials and tribulations for each other and how taxing all that travel can be. We try to look at it in our favour – it’s made us closer and we’ve had some amazing experiences together. Doug: And magnificent friendships too. Our friends in the industry call us Surf and Turf because of Lori’s involvement in cruising and mine in land vacations.

And the cons? Doug: Sometimes we absolutely have to cut the travel talk off. And there is a lot of juggling and coordinating needed, particularly with our daughter, as we travel so much. Lori: Thank heavens for Skype!

What do you think is the secret to a happy marriage? Doug: Communication and being very open. Lori: We’ve always got each other’s back.

How will you be spending Valentine’s Day this year? Lori: Up north. We are lucky enough to have a ski place in Thornbury and we’ll be with friends and our daughter Savanah.

Happy Valentine’s Day from all of us at OpenJaw!