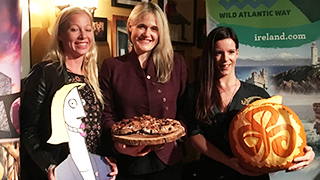 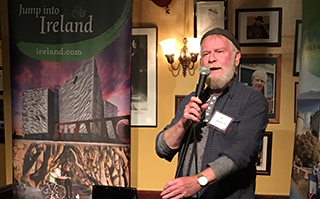 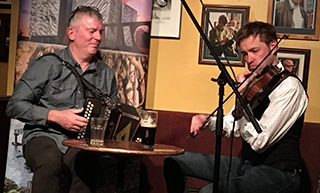 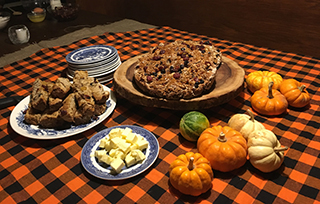 It was an evening of stories, songs, whiskey and barmbrack, as Tourism Ireland brought Samhain (pronounced Sow-in) to Toronto’s Dora Keogh pub.

Samhain is a Gaelic festival marking the end of the harvest season and the beginning of winter or the "darker half “of the year. It’s also a precursor to what we now call Halloween. Renowned storyteller Jonathan Lynn and traditional Irish musicians lent much atmosphere to the event.

Dana Welch, Manager-Canada for Tourism Ireland, used the evening as an opportunity to not only celebrate the Irish origins of Halloween but to also highlight just how easy it is for Canadians to visit “the land of saints and scholars” with new flights this year and next, and the country’s record year overall.

“We had a record year last year for tourism… over 200,000 Canadians went to Ireland [in 2017], which is really exciting,” said Welch. “We’re a top 10 source market globally, and actually number five when it comes to revenue, so we’re really excited with the growth that’s coming out of Canada and we anticipate double-digit growth this year based on how North America is trending for the year.”

That continued growth is thanks in large part to expanded air access. “It’s never been easier to get to Ireland from Canada,” said Welch, who highlighted the close to 8,000 seats a week to Ireland in the peak summer period, and year-round direct flights from Toronto.

“[These are] great increases in access,” continued Welch. “It’s an opportunity to work with our partners – airlines, tour operators and travel agents – in promoting Ireland this year and next; it’s a really exciting time.”

In terms of Halloween, Welch spoke about the celebration’s Irish roots. “Tonight we’re highlighting and celebrating the fact that Halloween originated in Ireland. It was an ancient Celtic festival called Samhain – about 3,000 years ago people would dress up in costume to ward off evil spirits,” and – fun fact – they used to carve turnips, which eventually morphed into pumpkins as the celebration became more westernized.

“One of our team members actually tried to carve a turnip, which is ridiculously hard, so there are probably a few reasons why it turned into pumpkin carving,” Welch said.

Along with the Dracula festival held every year in Dublin, Welch mentioned the annual Halloween festival in Derry-Londonderry, a city that has been dubbed “the best Halloween destination in the world.”

Complete with costumes (“if you’re not in costume you will be the odd man out,” said Welch), parades, haunted walks, performances and installations, and capped off by a fireworks display over the banks of the River Foyle, this family-friendly event is definitely a draw for visitors to Ireland. “We’re seeing more and more people travelling over for it.”

“If you’re a fan of Halloween, being able to experience it where it originated is really exciting,” said Welch, who also encourages agents to get in touch with her or Sandra Moffat, Tourism Ireland’s trade promotions and digital marketing executive in Canada, if they are interested in images, social media posts or content about Halloween in Ireland, or any other festival held throughout the year.