Wine, Water and Wellness in Hungary 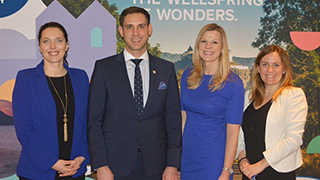 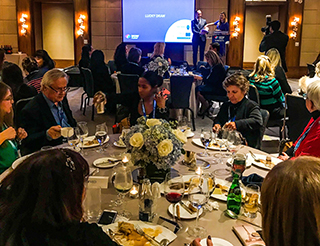 Palkovits (left) and Sarmon were the main presenters of the evening. 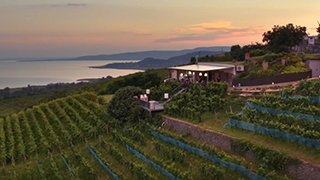 A screenshot from WOW Hungary's "Wellspring Of Wonders" video campaign.

For a landlocked country, Hungary sure offers a lot of water-centred experiences, not to mention a myriad of land activities to choose from.

The Hungarian Tourism Agency presented a preview of Hungary’s new tourism attractions and priorities for 2019 in a dinner presentation at the Ritz Hotel in Toronto on 22JAN. The agency’s Zsuzsanna Sarmon was joined by Hungary’s Consul General Valer Palkovits in sharing what makes this Central European country stand out.

“Budapest is home of many UN institutions and it hosts more than 20 Hungarian and six international universities and colleges. It’s a real European capital with its mesmerizing culture and nightlife and its flourishing culinary scene. If you are lucky enough, you can have the chance to discover our 22 colourful wine regions, the unbroken horizon of the great plain, or the beautiful Lake Balaton,” said Palkovits.

“The new direct flights from North America to Budapest provided by Air Canada Rouge and LOT prove that Central Europe is an up-and-coming destination that is becoming easier to reach and discover,” he added.

If you’re hungry in Hungary – sorry, it had to be done – your options for great food are limitless, including four Michelin-starred restaurants in the capital, three with one star and one graced with two. Sarmon highlighted chicken paprikash – a hearty chicken stew loaded with fragrant paprika - as a popular dish in Hungary, a country whose cuisine favours cooking with the ground spice made from bell peppers.

But Sarmon encouraged guests to not stop at Budapest and go beyond the capital, as that’s where they’ll find the true spirit and gems of the country.

The Tokaj region, in northeast Hungary, is renowned for its wines, particularly the eponymous dessert wine, a world-famous, sweet, amber-coloured concoction. The Tokaj Wine Region Historic Cultural Landscape, where the confluence of a temperate climate and mineral-rich soils produce some of the world’s most prestigious natural sweet wines, was inscribed on the World Heritage List in 2002.

The spa and wellness opportunities in Hungary include thermal pools and mud baths said to have healing properties, and Sarmon says for this reason, medical tourism is a popular trend in the country. The Hungarian Tourism Agency was proud to point out that Hungary holds the fifth largest thermal water reserve in the world, boasting more than 1400 springs, 200 thermal baths, and over 40 modern health spa hotels.

Illustrating Hungary’s dynamic appeal as a destination for both adventure and relaxation, agency representatives went on to emphasize some of the country’s natural wonders. Hungary’s Lake Balaton is the largest freshwater lake in central Europe and a foremost tourist attraction, with warm waters conducive to bathing, sailing and exploring  a limestone cave system, all while surrounded by the expansive golf tracks, winding cycling trails, greening vineyards and preserved historic castles.

The Hungarian Tourism Agency bid farewell to its guests with the showing of a reimagined brand and tourism focus for Hungary in 2019. The video offers a visual on the country’s water-based attractions, with a special mention of the famous “cave bath” in tourist-favourite Miskolctapolca.