WestJet Shows Off Its First Dreamliner At YYC 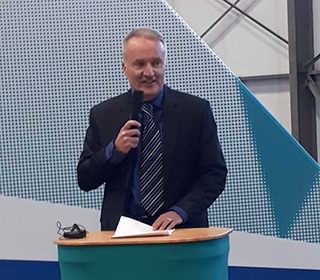 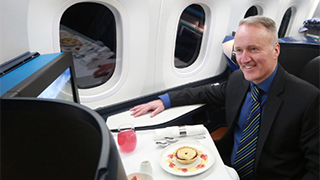 Sims sits in one of the business class pods. 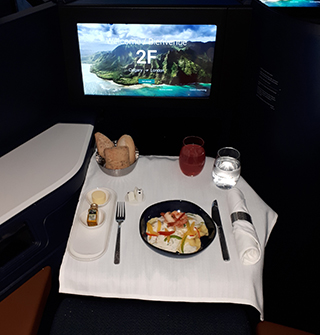 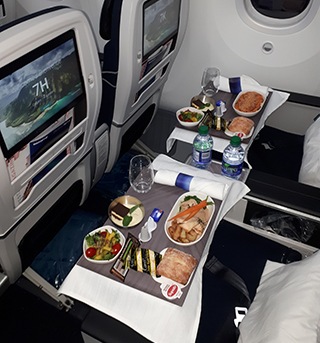 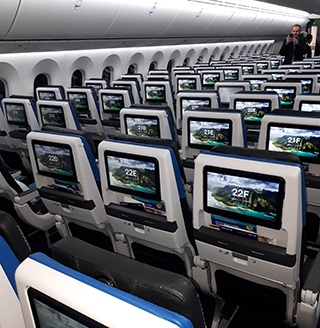 Key members of the travel trade and consumer and trade media took a tour of WestJet’s first 787 Dreamliner yesterday in Calgary.

Only the nose of the large long-haul jet fit into the current hangar at the WestJet campus near YYC. The carrier is in the process of building a new $50 million hangar to accommodate the wide-body aircraft. Two more 787s will arrive in the coming weeks, followed by three in 2020 and four in 2021. WestJet has options for 10 more orders.

Named “Clive Beddoe” after the WestJet founder, the airline’s first Boeing 787 aircraft will begins scheduled service to YYZ next week and international service to London-Gatwick on 28APR.

CEO Ed Sims said WestJet chose Calgary as its Dreamliner hub because it believes the market is currently under-served for wide-body, international flying. He said the new service, which will also include flights to Paris and Dublin beginning this spring and summer, will offer Calgarians more convenient departure, arrival and connection times than any other airline.

“Calgary has typically had to fit into schedules designed around other airlines’ home bases,” Sims said. “Our evening flight times are designed to suit Calgarians, first and foremost. The rest of the world can fit around us.”

Sims said the new service will bring many economic benefits to Calgary, both in the form of direct and indirect employment, as well as the impact of European customers travelling west to Canada.

“We are just as excited to bring guests from around the world to Calgary, Alberta and Canada. These aircraft are for you Calgary,” Sims said.

Chief Commercial Officer Arved von zur Muehlen, who moved his family from Asia just six weeks ago to join WestJet, says the Dreamliner arrival is a clear demonstration that “we are building a new WestJet.”

“The airline was created as a low-cost leisure carrier in 1996. Today we are just as relevant to the business traveller. We are becoming a truly global network carrier.”

Travel agency owners and agents were among the key clients invited to tour the aircraft. Several spoken to by Open Jaw described the aircraft as a “gamechanger” for WestJet.

There were plenty of oohs and aahs as guests toured the three-class interior of the 320-seat plane, which features 16 lie-flat business class seats and 28 premium economy, as well as 274 economy seats.

“We have literally reinvented what we do aboard the aircraft,” said Louis Saint-Cyr, WestJet’s VP Guest Experience. “The colours, the mood-lighting, the dishware, free meals in economy and a dine-anytime format in business class gives guests their choice of experience, one that is tailored and personalized.”

“The Spirit of Canada” is printed on the plane as part of its livery, and guests on long-haul flights will be gently awakened by the sound of a loon’s call. Even the salt and pepper shakers in the business class meal service are shaped like icebergs or mountains – depending on who you talk to. 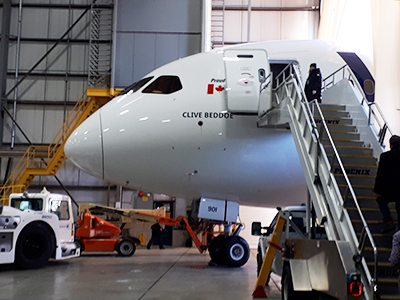 The nose of WestJet's first 787 Dreamliner in the hangar at YYC.

Andrew - February 15, 2019 @ 12:20
What a bunch of rubbish about undeserved international flights to Calgary!. AC has lights year round to LHR and FRA:double daily the summer and a litany of UK German British charter carriers fill the slots in Calgary! Daily KL to AMS. And that is just Europe. Non stop Jumbos go to China AND Japan. Now Edmonton however, has only has NO LHR or FRA or DUB or PAR or TYO or anything to China. 5 times a week to Reykjavik and Amsterdam. Now that is an undeserved market for 1.1 million greater Edmonton Folks. Wesjet is so focused on competing with AC these days that they can't see the forest for the trees. Just like WD and CP they better be careful or they could be gone within 3 years.