An Ambiance Of Renaissance At Atout France's Roadshow 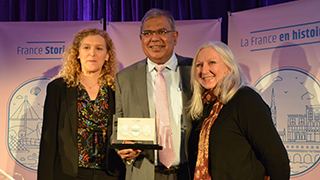 Director of Atout France in Canada Mélanie Paul-Hus (left) with Connaissance Travel and Tours CEO Vincent Veerasuntharam and Liz Dachuk, Business Development Manager, the winners of the Partner of the Year Award. 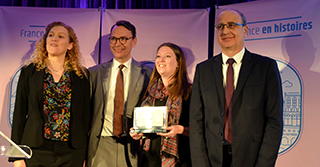 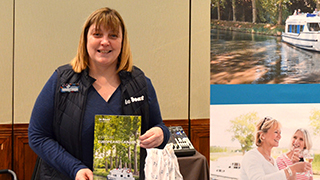 Lisa McLean, representing Le Boat, was a first-time exhibitor at the Atout France Roadshow in Toronto. The brand is a specialist in canal boat hire in Europe and Canada.

When once you have tasted flight, you will forever walk the earth with your eyes turned skyward, for there you have been, and there you will always long to return."

The French word "renaissance" literally means "rebirth" in English, an apt name for the pivotal period of European history that spurred a burst of creative energy and revolution in architecture, science, politics, arts and virtually every facet of everyday life.

At the heart of this movement was Leonardo da Vinci, a man whose forward-thinking ideas continue to permeate our lives 500 years after his death.

In honour of this great visionary and this exceptional period in history, Atout France shone a spotlight on the Loire Valley -- the region in Central France where Da Vinci lived during his last years -- at its Travel Trade Roadshow on 27FEB at the Westin Harbour Castle in Toronto.

France's charm, gastronomy and vintages are known around the world, but as evidenced at the roadshow, the country is a rich tapestry of diverse experiences, from the Celtic heritage of Brittany to Somme, the area of northern France known for its historic battlefields and memorials.

More than 150 people were invited to attend the trade show to connect and network with 20 exhibitors ranging from airlines, tour operators, hotels and resorts and tourism boards.

Entering the trade floor as a new exhibitor was Le Boat, a boat rental service with 36 bases across eight European countries and Canada that offer hands-on travellers a unique way to discover a destination.

The evening concluded with a cocktail reception and awards to recognize industry partners.

The Product of the Year Award went to Kensington Tours for having the most original tour or stay in France. The company's "Paris And The Chateaux Of The Loire Valley" tour combines the dazzling haute couture of Paris with the aristocratic and medieval flair of the Loire Valley.

"It's a great honour. We worked hard on the product, always tried to find what's new, using Atout France as a resource to do that. It's just another stamp for Kensington Tours that we're pushing the boundaries of new product in the industry," said Jolene Plant, Kensington's Director of Product.

After arriving from Montreal the night before, the roadshow was headed to Calgary and Vancouver following its Toronto stop.

"This year will be celebrated with all kinds of events. With over 700 events set to occur so far, from international exhibitions, digital animation, festivals, concerts, shows and special visits to iconic places, everyone can experience the anniversary," said Marc Richet, Director of the Loire Valley Tourist Board.

The Château du Clos Lucé in Amboise is the nucleus of celebration. This is where da Vinci worked as a painter, engineer and architect for King Francis I and lived for three years until his death on 2MAY, 1519.

Guided tours and visits to the château open a window into the great master's life, showcasing da Vinci's residence and sources of inspiration.

A particular source of excitement is an art exhibition hosted at the Château du Clos Lucé with the landmark event showcasing da Vinci's monumental masterpiece, The Last Supper – a piece personally commissioned by King Francis I. The tapestry – a monumental 4.9 metres high and 9.15 metres long – is currently being restored with the support of the Château du Clos Lucé and will be on display from 6JUN to 8SEP.

This year the château will also open a new cultural facility where the public will discover two major facets of the "Renaissance Man's" work: da Vinci the painter, and da Vinci the architect through interactive exhibits.

It should be noted that beyond the remarkable heritage and history of the Renaissance period, there is much more to the Loire Valley.

Travellers can find "renaissance" in other ways. The region boasts over 400 wine cellars, 22 castles of major significance with spellbinding gardens, 900 km of signposted cycle routes and cruises along the Loire Valley.