Finding Your Beat in Offbeat Britain 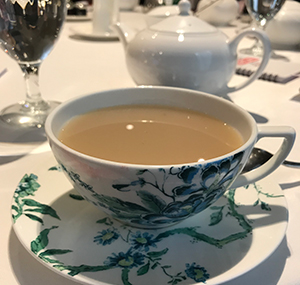 How very British! Travel agents and media enjoyed tea at the VisitBritain/Globus event. 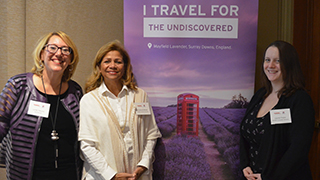 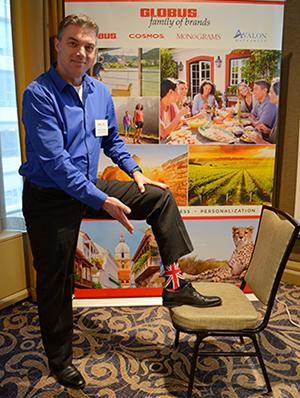 Hektor Kaczuga, Business Development Manager with Globus family of brands, came well-dressed for the afternoon tea, right down to his socks! 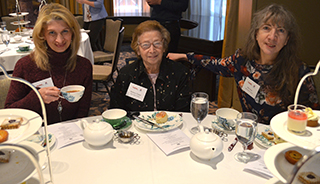 While these London landmarks are must-see locations, VisitBritain wants to inspire travel agents and their clients to "take the cobblestones less travelled" and discover the United Kingdom outside the limits of its capital.

"Sixty-eight percent of our guests will stop or stay in London, but we want to inspire them to go beyond," said Lynda Falcone, Travel Trade Development Manager with VisitBritain.

Globus family of brands has just the programs to do that.

At an Afternoon Tea With a Twist event on February 27 at The Omni King Edward Hotel, travel agents were introduced to the company's new "Undiscovered Britain" tours over a classic British ensemble including fine teas served in delicate china, flaky scones and Devonshire cream.

"We want to articulate to travel agents that each region has its own flair. That's why we're so excited about Undiscovered Britain," said Falcone.

Undiscovered Britain tours are offered through the company's Globus brand – its first-class option – and the more value-priced Cosmos and Cosmos Lite, that also give travellers more freedom with their schedule.

Each of the brands provide escorted tours aboard a plushy wi-fi-equipped coach, but price point, how many meals are included, how structured the days are, and amenity enhancements are where the differences lie between the brands. Globus hotels, for example, are "centrally located", while Cosmos accommodations are "conveniently located."

"[The event] was very informative without feeling like I was lectured. There were some interesting things I didn't know, like about the Oyster card," said Deb Gray, an agent with New Wave Travel, referring to the electronic ticket used on public transport in Greater London in the U.K. (much like the Presto card that Torontonians are familiar with).

She was also impressed with Globus' level of tour customization and small-group travel in the company's Monogram brand.

"I'll be reading up more on that. We don't always think about those things," she said.

Stéphanie Bishop, Managing Director for Globus family of brands, also reminded agents that people tend to have a very outdated perception about touring.

"I encourage you to think of a tour way beyond what the traditional tour is because there are many definitions of what a tour is. There is a huge amount of travellers that really want to take a tour and sometimes as consultants, we have preconceived ideas of what a tour is," said Bishop. "Tour has seen a revival. There are different styles, different ways of taking a tour, different paces, but everything is included. You don't wait in line, you have top-notch coaches, you have free wi-fi in the coaches, you have master storytellers."

With the increasing airlift out of Canada, there is no better time to discover the undiscovered in the U.K.

As Brexit is on the minds of politicians, European residents and business owners, Canadians will want to visit Britain regardless of whether it's in the European Union or not, says Bishop.

Overall Globus trends are showing that the average selling price is on the rise, sales beyond iconic places are increasing and that travellers are staying longer at destinations. VisitBritain and Globus are anticipating a particularly robust season for travel to Great Britain.

"From a Globus perspective, it's business as usual because we haven't seen any decline in any way, shape or form," said Bishop, adding that Britain is among the Top 3 Globus destinations in Europe, along with Italy and France.

In fact, as Falcone pointed out, travel to Britain increased by 24% the year that Brexit was announced, with travellers eager to take advantage of a depreciated pound.

"Because nothing is settled yet, there is no definitive information on how things will proceed, it's business as usual for the tourism sector. I'm thinking pound might go down, which would be a huge plus for Canada," she said.

Travel agents came away with a few tips by Bishop on selling Globus tours: