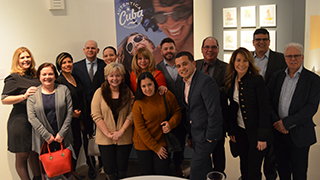 Members of the Cuba Tourist Board and invited guests. 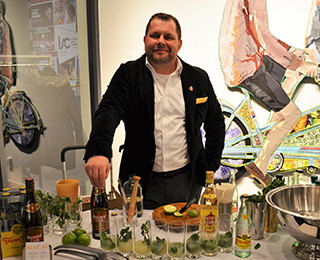 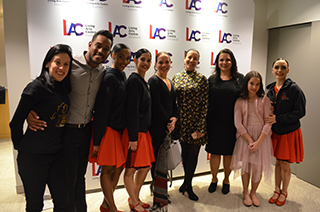 Some of the dancers from the Litz Alfonso Dance Cuba ensemble with the choreographer herself (fourth from left).

Toronto got a small reprieve from frigid temperatures last Friday night. You can thank The Litz Alfonso Dance Cuba: Made in Cuba event for that.

The group of roughly 20 dancers, singers and musicians delivered a spicy performance at the Living Arts Centre in Mississauga on Thursday.

The show, sponsored by the Cuba Tourist Board, gave tour operators, airline representatives, hoteliers, members of the General Consulate of Cuba in Toronto, media and guests a small taste of “Autentica Cuba” – “authentic Cuba.”

Warming us up for the show (and further adding to the authenticity theme), Donnie Wheeler served up what some guests said were the best mojitos they’d ever had. After all, as the Havana Club rep in Canada, this is a man who knows his rum cocktails and can tell you all about the history of rum distillation in Cuba.

As the destination’s top market by a large margin, Canadians know that Cuba has great beaches – Varadero was recently ranked third among the ‘World's Best Beaches’ by TripAdvisor users -- but the tourism board’s ‘Autentica Cuba’ campaign aims to encourage Canucks to go beyond the beach.

“We want people to get to know the “autentica” Cuba,” says Eloy Govea, director for the Cuba Tourist Board in Canada. “The show that we’re going see today is made in Cuba but more importantly, it has what autentica Cuba promises about the music, the culture, the arts and the people.”

At the pinnacle of arts and culture this year is the country’s capital, Havana, celebrating its 500th anniversary.

“It’s our most important city and it’s a fantastic, magnetic city. This year, we will have more than 200 events celebrating the anniversary, including the Havana Biennial 2019, probably the most incredible event that you will see,” says Govea. “Imagine, for a full month from April 12 to May 12, the whole city becoming a gigantic exhibition place of visual art.”

Venturing beyond the capital’s boundaries, many of Cuba’s destinations have a distinguished cultural and artistic flair that reflect the country’s history, colonial influences and development.

Santigao de Cuba, almost 900km away from Havana on the opposite side of the island, is the city with the most history, says Govea, for its role in the Cuban Revolution in the 1950s.

Holguin, with beaches surrounded by lush vegetation from the Nipe-Sagua-Baracoa mountain range, is the place where Christopher Columbus first landed in 1492. Then there’s Trinidad, in the island’s south just 300km from Havana, home to the best preserved colonial architecture of this hemisphere according to The Metropolitan Museum of Art in New York, says Govea.

Much to the delight of some (and perhaps the chagrin of others) Cuba is undergoing a transformation that will increase its tourism competitiveness and further position it as a must-visit destination.

“We welcome that so much because it gives us a level of completeness and ability to attract every single budget, every single interest. We are very much committed to the very extensive project of expansion of our infrastructure that includes over 100,000 new rooms through 2030, more than 20 golf courses, more than 20 international marinas, and real estate projects,” said Govea.

The culinary offering in Cuba is also exploding.

“There are more than 2,000 new privately owned restaurants across the island, most in Havana,” says the director. “They are certainly changing the food scene in Cuba and it’s not me saying that – it’s Jack Nicholson, Rihanna, Beyonce and Gerard Depardieu saying that.”

At the core of this expansion are Canadian tourists. Enjoying proximity to the island (only a 3.5-hour flight from most gateways), a wide offering of gateways (direct flights from over 30 in Canada!) and fantastic value all year round, it’s no wonder Canadians make up one third of this destination’s visitors.

“Cuba is in a growing mode, for sure, and Canada is a big part of that. It’s our number one market and our main source when we look for who’s going to fill all this space,” says Govea. “It’s where we have the most airlift and the best connection with the people.”