Getting High On Saint Lucia 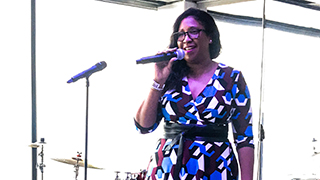 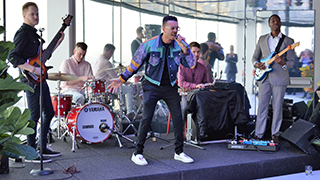 Sage Harris (centre) and his band brought the funk that evening, a perfect opener to get everyone excited for the 2019 Saint Lucia Jazz Festival Produced in Collaboration with Jazz at Lincoln Center. 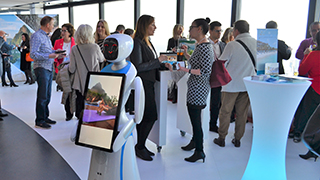 This Autonetics robot had a very important role: show off a video of beautiful Saint Lucia.

Networking event held 114 stories up at the CN Tower
For anyone bummed about attending a Friday night work event, their sentiments quickly turned around once they stepped off the elevator onto the 114th floor for an exclusive VIP networking event organized by the Saint Lucia Tourism Authority (SLTA), staged at the Lookout Level of Toronto’s CN Tower on 1MAR.

A number of hoteliers, industry partners and guests from the Consulate General of Saint Lucia in Toronto were in attendance to network, socialize and mingle against a backdrop of the downtown skyline and Lake Ontario.

Canadian artist Sage Harris performed a funky R&B set that got people in the mood for the  launch of the 2019 Saint Lucia Jazz Festival Produced in Collaboration with Jazz at Lincoln Centre. The young artist’s hit single “Girlfriend” was produced by Saint Lucia native YogiTheProducer.

Some of Saint Lucia’s most prestigious hotels were represented at the event – Marigot Bay, Cap Maison Resort & Spa, The Landings and -- the minister’s former place of employment before he took up politics -- Sandals.

Charlie Agostino, Business Development Manager at Canlink, noted that Canadian-owned Anse Chastanet is completely carbon neutral and strives to become carbon positive by the end of this year.

She also described a special promotion at the world-renowned Jade Mountain Resort, where arrivals between 1MAR and 31OCT 2019 booked with Travel Brands or Air Canada Vacations receive a complimentary upgrade to all-inclusive. This is an exclusive promotion for the Canadian market.

Serenity at Coconut Bay, a new 5-star luxury suite resort that opened in June 2017, highlighted that within its first eight months of operation, the resort ranked #1 among the 57 hotels in Saint Lucia reviewed on TripAdvisor. The adults-only Serenity features 36 plunge pool suites that range in size from 1,200 to 1900 sq ft of interior and exterior space. All have butler service, gourmet dining and 24-hour room service.

Taking the stage to hoots and hollers from the guests, the effervescent Honourable Dominic Fedee, Minister of Tourism for Saint Lucia, got guests excited for what’s to come in Saint Lucia.

“It’s a very exciting time for us on the island. We’re building a brand new airport terminal and we’re working on a Village Tourism Project to bring our villages out and make them into tourist destinations,” he said. “We’re also expecting to see our room inventory grow by about 50%. We’re going to get about 2,000 new rooms in Saint Lucia in the next six to seven years, so we’re really excited about this as we grow as a tourism destination.”

Fedee also had words of thanks to the travel agents who support tourism in Saint Lucia.

“Tourism means a lot to our people. It’s how we pay our bills, how we build schools and educate our children, it’s how we build hospitals and do water projects to ensure that there’s a good quality of life for all our people,” said Fedee.

“So I want to say a special thank you to every travel agent here tonight for the bookings you have made over the years because they haven’t just been bookings doing business, but you have been changing the lives of people in a small island developing state.”