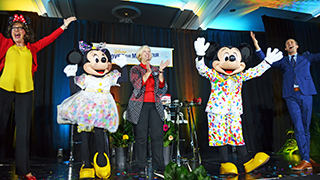 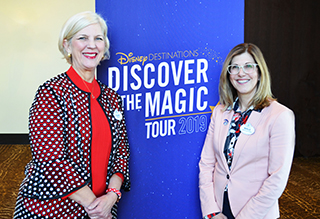 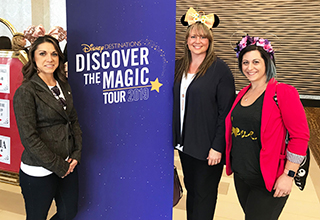 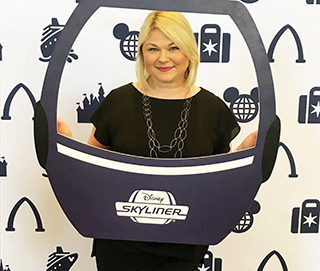 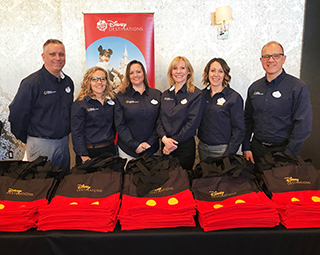 Members of the Disney sales team.

Disney is bringing “a galaxy far, far away” a bit closer to home, with the summer opening of its largest and most anticipated land yet – Star Wars: Galaxy’s Edge.

To help agents understand how to get their clients through the gates, Disney hosted a Discover The Magic dinner at the Pearson Convention Centre. The event also covered all that’s new with the corporation’s theme parks, cruise line, accommodations and tours and products.

Disney Parks are preparing for unprecedented demand with the opening of Star Wars: Galaxy's Edge, raising concerns about delivering a positive guest experience, managing access and regulating the flow of people.

Galaxy’s Edge – the largest single-theme addition to a Disney park -- is raising the curtain on 31MAY in Anaheim, CA’s Disneyland Park and 29AUG in Disney World in Orlando, FL. Millennium Falcon: Smugglers Run, will be the first ride to launch as part of the two-phase opening, while Star Wars: Rise of the Resistance, will debut later this year.

For the first three weeks in Disneyland -- 31MAY-23JUN -- reservations at no additional cost will be required to visit Galaxy’s Edge, with no exceptions. As of 24JUN, reservations will no longer be needed.

Guests staying at one of Disney’s three resort hotels – Paradise Pier, The Disneyland Hotel and The Grand Californian – are guaranteed one reservation during their stay.

“While we’re really excited about Star Wars, we’re also being really transparent with the agents and our guests, because everybody won’t get in, so we can’t guarantee access. Just because you have a ticket, it doesn’t mean you’re going to get in there,” said Claire Bilby, Senior Vice President of Sales, Services & Events.

Disney FastPass+ will not initially be offered for Millennium Falcon: Smugglers Run, nor for Star Wars: Rise of the Resistance.

Agents are encouraged to stay tuned to Disney Travel News and DisneyTravelAgents.ca for updates leading up to the big opening. For agents that aren’t affiliated with Disney, the sales team is a good resource.

At this time, there is no estimated date as to when reservations will go live, but Bilby said the reservation procedure and timing will be announced “soon,” both for guests staying at one of the Disney hotels, as well those staying elsewhere.

“[The reservations] are a good move on Disney’s part, as Star Wars fans will flock to these new parks,” Andrea Arkell, travel consultant and owner of Arkell Travel, told Open Jaw. “It was great to find out that those staying at the Disneyland Resorts would get a guaranteed reservation during their stay. It’s a good way to ensure clients get to experience it during their stay.”

Michelle Radman,  Vacation Specialist with Pure Magic Vacations, told Open Jaw she was “thrilled to hear about the strategies Disney will take to ensure an exceptional guest experience. As this will be a high-demand, popular land to visit, it seems that Disney has put their best team together to make sure their guests will have the opportunity to experience and enjoy Star Wars: Galaxy's Edge.”

As for Star Wars at Disney World, reservations won’t be required when the park goes live on 29AUG, and Galaxy’s Edge will be part of the Extra Magic Hour -- an early admission option for guests staying at a registered Walt Disney World Resort in Florida. But even then, with the high crowds anticipated, there is no guarantee on access to the attraction.

“You always have those folks that want to want to be there right at the very beginning, but the great news is that it doesn’t go away. It’s not like it’s a limited time capacity,” said Bilby.

With all the excitement around Galaxy’s Edge, Radman says it’s important for her as a travel advisor to plan ahead, now more than ever.

“Each client I speak with wants details about the rides, food options and shopping. The overall interest is unprecedented. With so much to see and do, our roles as vacation planners have never been more in need,” she says. “I will also advise my clients that Hollywood Studios may be extra busy, so be patient when standing in lines and moving through the park.”

The Disney parks are always in-demand products, even without the opening of a new world. Bilby recommended that agents book as far out as possible to secure hotel rooms and other services.

“You can start pulling FastPasses at 60 days, you can book dining at 90 days, so if you want to have your best of the best, you’re going to want to be booked prior to that. If guests want to come during a peak time period like Christmas, book at least six months out,” she said.

Marlie Morrison, Managing Director, Marketing & Sales, Canada/Japan/Australia for Disney Destinations, added that agents should keep the American holidays in mind when booking because what is a regular workday in Canada may actually be a statutory day off in the U.S.

With all the hoopla surrounding Star Wars: Galaxy’s Edge, Disney wanted to remind guests that between its Disney Cruise Line returning to Greece after a 5-year hiatus, Mickey’s 90th anniversary, one-, two- and three-bedroom villas now available at the Oahu Aulani resort, new Adventures By Disney tour programs and new attractions and experiences throughout all of their parks, there’s a lot more to Disney than just Star Wars.