MSC “Plants A Flag” With First Office In Canada 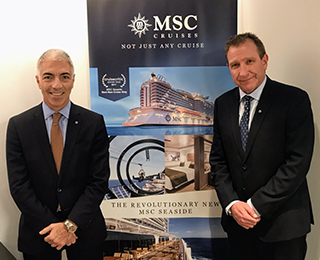 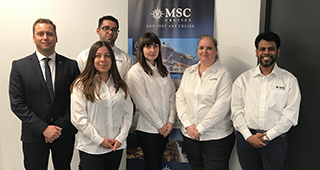 David Girard, Contact Centre Manager (left) with his team. Although this is Girard's first position in the travel industry, he joins with 20 years of contact centre experience, his last 10 being in management. After working in the finance industry, government and insurance, he said his advance in the cruise sector was "refreshing." He told Open Jaw: "I used to be in the finance world where the market was so volatile. I find the travel industry is very refreshing and in most cases, people calling in are happy because they’re planning their vacation. It’s something I’m really excited to be part of." 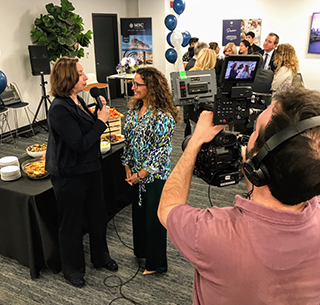 Put your money where your mouth is, the saying goes.

After expressing that the Canadian market is important and asserting a maxim of “thinking globally, acting locally,” MSC Cruises followed up on its words with action as it launched its first fully-staffed office in Canada, becoming the first cruise company to extend a direct line to the Canadian market.

The Swiss-based cruise line has been active in Canada for 15 years from a commercial standpoint, but it has always been on a remote basis. With 18 other country offices around the world, this is the first time the company is “planting a flag in Canada,” as newly appointed Country Manager Ian Patterson puts it.

It’s a significant milestone in the Canadian cruise industry, raising the bar for other players. When you think about it, this move is equivalent to MSC Cruises opening an office for California alone – a state that shares roughly the same population as all of Canada.

At an evening munch & mingle on 30APR, Open Jaw got a sneak peek at the cruise line’s new office in Mississauga, Ontario, the day before it officially plugged in its phones and broke in those headsets on 1MAY.

Decked out in the navy and white of the MSC brand colours, 15 perfectly bilingual employees across multiple departments work in the new space, including Finance, Sales, Marketing, Contact Centre and Groups.

“We recognize that the business warranted this further investment on behalf of MSC. We think globally, we act locally. It’s a natural progression for who we are,” Patterson told Open Jaw. “It’s about understanding the Canadian market and expanding the local presence here. The Canadian cruise market is very, very strong and it can only get stronger. The global cruise market is going to get stronger as well.”

In conjunction with the office opening, MSC Cruises has launched a website for Canadian consumers (www.MSCCruises.ca) and for CDN travel agents (www.mscbook.com/ca), allowing guests and travel advisors to operate in Canadian dollars and access resources, information and tools. The websites initially debut in English, but a French version will be rolled out before the end of this year.

Being able to book in Canadian Dollars was a big plus for Pam deHaan, Director of Marketing with tripcentral.ca, who called it “a big benefit." She was also ecstatic about the overall idea that Canada finally has a cruise HQ dedicated to our market.

“We’re going to have so much more support, it’s going to be quicker, and it’s going to be bilingual. Canadians buy a little bit different than the Americans, so I think this is definitely going to be a big advantage for us,” she told Open Jaw. “It’s so exciting to see cruising grow in Canada. We’re small compared to other markets like America and Australia, but there’s a huge potential for us to grow in the cruise market and it’s great that MSC is investing in Canada.”

As a former travel agent himself, Patterson says he fully understands the value of what the trade brings to MSC, calling it the “backbone” of their business.

“We’re all about the trade. Everything we do is for the true partnerships that we have with the trade, be it a tour operator, wholesaler or travel agent,” he said.

MSC is going through a massive phase of expansion on multiple fronts.

It has another 13 cruise vessels due to join its fleet by 2027, a dedicated new US$1.8-billion multi-ship terminal coming to PortMiami by 2022 and Ocean Cay MSC Marine Reserve, a private destination opening in the Bahamas in November.

The cruise line is also expanding into the full-ship luxury market, an experience inspired by the upscale Yacht Club sections on its ships, but an entirely different concept. It’s still early days for this project – with the first vessel scheduled for 2023 -- but Patterson said the four new ships, individually weighing 64,000 tonnes, will accommodate approximately 1,000 guests each.