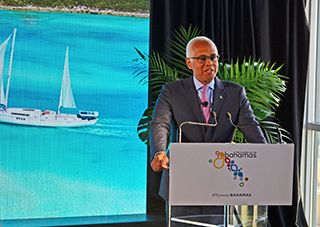 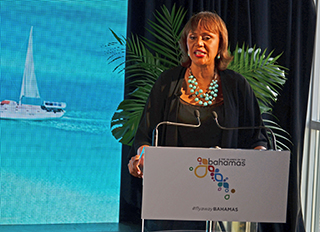 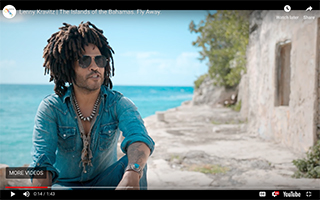 A screenshot of Bahamian-American
Lenny Kravitz from the new Bahamas tourism promotion campaign. 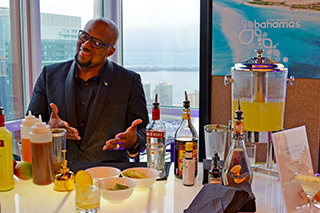 Marv Cunningham, aka Mr. Mix, brought his mixology skills up from Nassau and crafted delicious cocktails for the assembled guests. 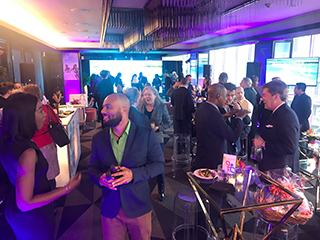 Toronto’s Bisha Hotel was the setting for the Bahamas promotional campaign launch. Lenny Kravitz, who stars in the campaign, also designed a floor of the hotel.

For the record, that news was sourced from Bahamian Tourism Minister Dionisio D’Aguilar, who visited Toronto last week to help launch a new brand campaign in Canada, the second-largest source market for the island archipelago comprised of 16 different destinations.

But while Minister D’Aguilar is clearly biased, the numbers suggest he’s not wrong. Canadian stopover visitors were up a robust 14.4% last year. And with the first major broadcast and digital promotion campaign in some time, the spotlight should drive even more traffic.

While some destinations use celebrities to promote their brand, others use local people to tell their stories, The Bahamas is doing both.

The celebrity face (and familiar dreadlocks) belong to Bahamian-American rock legend Lenny Kravitz. His mother, actress Roxie Roker, was born in the islands and the rocker spent many summers there, and now returns with his own family.

Set to the lyrics of Kravitz’s hit song Fly Away – which was inspired by, written and recorded in the Bahamas -- the television commercial and supporting marketing campaign capture his deep personal connection to the islands. The campaign debuted in January in the U.S. and just began airing in broadcast markets across Canada this week.

Kravitz is a perfect fit. He’s always maintained a cool edginess, and he’s familiar to a previous generation for his hit songs and 40 million record sales, and to millennials for his movie roles in The Hunger Games franchise, as well his design work, which includes helping create some of the suites for Toronto’s uber-hip Bisha Hotel, where the Bahamas event was held.

One of those personalities is Lady Di (aka Eleuthera’s “Pineapple Lady”), a pineapple farmer who may not be the ‘real’ Lady Di, but is as real as they come, and a wonderful, unassuming ambassador for her island. She has also become something of a social media star following the video’s release. Other videos highlight things like Junkanoo and the popular People-to-People program that matches visitors with local hosts.

“We are excited by this campaign and honoured to partner with Lenny Kravitz. Our islands and his song fit perfectly together, allowing us to reach a broad new audience, especially digital content consumers, through authentic storytelling,” said D’Aguilar.

A welcome guest at the event was Nassau mixologist Marv Cunningham, aka ‘Mr. Mix,’ who created two delicious signature drinks for attendees, a smoked pineapple cosmopolitan and a tamarind rum sour.