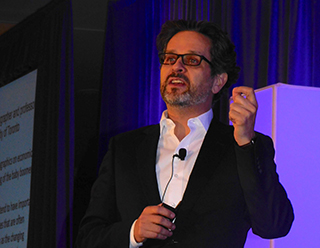 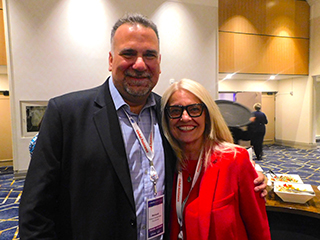 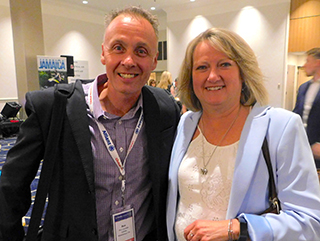 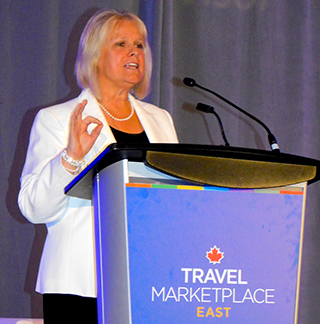 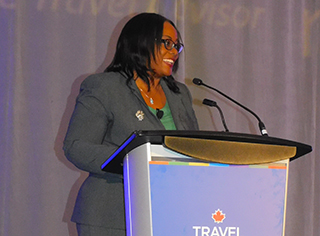 Angella Bennett, the recently arrived Regional Director, Canada for the Jamaica Tourist Board, invites the audience to join a Jamaica-sponsored cocktail reception with Caribbean food and music.

Travel MarketPlace East attracted an eager crowd of 420 travel agents and over 100 suppliers to the Delta Toronto Airport Hotel this week for two days of business-building workshops and networking.

Aimed at travel advisors of all levels of experience, the sixth-annual event organized by U.S.-based travel trade publication Travel Market Report brought together suppliers, advisors, and representatives from the Association of Canadian Travel Agents, a partner in the project.

Travel Market Report’s Anne Marie Moebes, the key organizer of the event – which now has an annual west coast counterpart in Vancouver – told Open Jaw that Travel MarketPlace has come a long way since the first event that attracted about 100 agents.

“We have been so well received by the industry here. There is an appetite for education and networking, and we listen closely to the feedback and what agents are looking for.”

During her address in the opening session, ACTA President Wendy Paradis shared the results of research conducted in part on Open Jaw, that asked readers their preference for a title – travel agent, travel advisor  and travel consultant were among the choices. This came in the wake of U.S. association ASTA – changing the definition of the last letter of its acronym from ‘agent’ to advisor.’

“We formally use the term travel agent and the U.S. moved to travel advisor,” Paradis said. “In the last six months, we sent a survey asking you what you think and we received hundreds of responses. The number one answer is travel consultant, and we’ll be making changes over the next year.”

A long list of educational workshops attracted attendees, who were clearly keen to learn and expand their network of colleagues and supplier partners.

“It’s a great group of people and everyone is really motivated to make the most of it,” said Coreen Doucett, a top-seller with The Travel Agent Next Door.