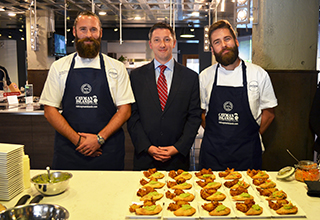 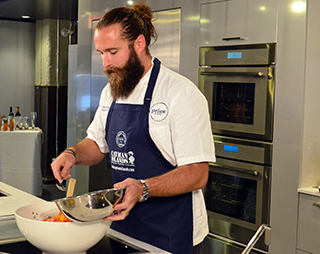 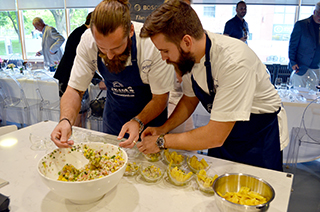 The Benoit chefs plate the ceviche with some plantain chips. 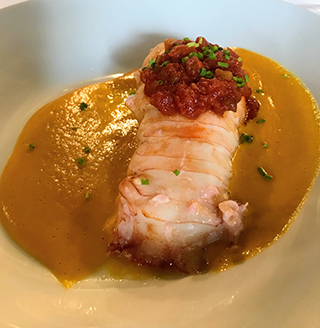 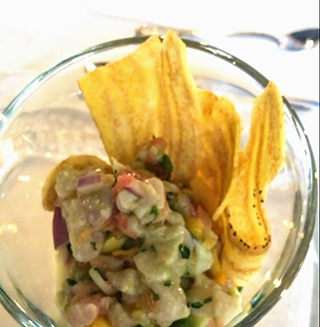 The Cayman Islands, with 200 restaurants to choose from, 140 nationalities and a growing farm-to-table movement, make for an interesting melting pot of flavours. The destination displayed it’s culinary prowess as support for the claim of being the "Culinary Capital of the Caribbean".

Last week, Toronto travel media and partners got a taste of that culinary claim at a dinner and cooking workshop at LUXE Appliance Studio led by a big name in the world of food – Dylan Benoit, renowned chef and current host of the Food Network Canada's Fire Masters series, and his brother Lucas.

Raymond Mathias, BDM for Canada for The Cayman Islands, says the destination has been enjoying strong visitorship so far this year, with AC and WS fly year-round direct from YYZ in just under 4 hours.

And it's an island that delectably appeals to the Canadian market.

"There are award winning restaurants, daily farmers markets, food tours, beachside shacks and fantastic food festivals. Culinary is a big motivator for Canadians and a big motivator for people travelling to the Cayman Islands, as well," said Mathias. "With 140 nationalities living on the island, it's great for the culinary scene. You've got the local, but you've got that international feel as well."

The Benoit brothers are originally from Barrie, Ontario, but Lucas now splits his time between the Caymans and Germany, while Dylan has been living in the Cayman Islands since 2010 and was proud to announce that he just recently received his permanent residency.

As Executive Chef at Prime Group -- a private chef and consulting company in the Cayman Islands -- Dylan knows the Cayman foodie scene better than anyone, and says it absolutely deserves the notoriety as the Caribbean's culinary capital.

"I've travelled quite a bit through the Caribbean and we're in a unique position geographically and economically in the Cayman Islands where we bring in a lot of people from around the world and therefore the knowledge of food and demand for high quality food is very prevalent, which draws a lot of high-end chefs and restaurants," he told Open Jaw. "In the last decade, there's also been a massive growth in the farm-to-table and ocean-to-table movement. We're seeing a major shift towards what's local and seasonal. In the Caribbean, that notion hasn't really stuck like it has in the Cayman Islands."

For the evening's meal, Benoit designed a menu inspired by Cayman flavours and traditions, starting with conch fritters atop seasoning pepper aioli and a Cayman beef patty for the canapes.

Guests got their feet wet when it came to the appetizers, preparing a red snapper ceviche with three different types of citrus, mango and avocado under the Benoit brothers' guidance.

Butter poached Caribbean lobster with a roasted pumpkin and coconut soup was served as the main dish and a coconut chocolate mousse – infused with nitrogen for an added airiness -- satisfied the sweet tooth for dessert.

"All of these flavours are things you would find in the Cayman Islands. You wouldn't necessarily find this exact dish, but you'd find something similar, and that's what we're trying to promote – although there's a lot of history and culture, we're seeing how people are starting to interpret flavours and create a fresh take on Cayman cuisine," says Benoit. "It's healthy, interesting and not just rice and beans, like a lot of people feel the Caribbean can be."