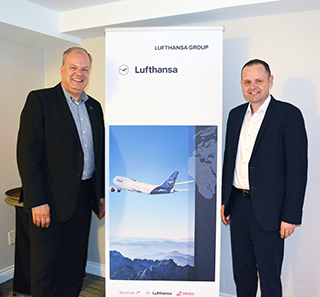 Just eight weeks into his new role as Vice President of Sales for the Americas, Frank Naeve, carved out time in his schedule to meet with Toronto travel media at a breakfast roundtable on 13JUN for conversations about Lufthansa's role in the Canadian market and the next steps for the airline group.

Based in New York, Naeve, joins the sales team with 30 years of experience working for Lufthansa Group – mainly in cargo in the Asia Pacific region.

Naeve said his first priority will be "making sure I get into the business side of things as quickly as possible, doing a lot of listening, visiting customers and meeting the teams across the Americas."

One of his primary mandates is to manage the commercial cooperation LH has with partners United Airlines and Air Canada under the transatlantic Joint Venture agreement.

The goal is to "improve the customer interface with the joint venture that we have with Air Canada and United Airlines" and, finally, increasing the footprint in the Americas.

Naeve told journalists that Lufthansa Group – which also owns subsidiaries Austrian Airlines, Swiss International Air Lines and, under its Eurowings Group and Brussels Airlines, among others – has enjoyed great success in the Canadian market, where it flies to five European hubs out of Vancouver, Toronto and Montreal.

As to what the continuation of that success story looks like in terms of opening up new markets, it was too soon to say, but Naeve noted that the airline is constantly reviewing routes and that "there are a number of projects in the pipeline" with regard to the Canadian market.

"The last years have been very positive for us in this market and there are always discussions to either adding completely new routes, as we've done this year with Montreal-Vienna, but there is nothing that we have today in terms of announcements," he said.

Lufthansa's summer schedule includes 62 frequencies out of Canada from Vancouver, Toronto and Montreal, into Frankfurt, Munich, Brussels, Vienna and Zurich.

For Canada, this means that the Queen of the Skies, the Boeing 747, flying out of Toronto and Vancouver will be phased out and eventually replaced 777s, said Hans DeHaan, Senior Director Canada, who also attended the roundtable discussion. The 777s will come with new revamped business class.

"That aircraft is unbelievable for passenger comfort," said DeHaan. "It has a different pressurization in the cabin, which means you arrive in better shape. You really notice the difference. So that's really a step forward for us."

Modernizing the fleet has improvements not only for the passengers experience, but from a sustainability standpoint as well, as new generation aircraft emits lower CO2 levels.

Lufthansa is also planning to eliminate the use of regular fuel consumption vehicles for ramp operations within the next decade with a switch over to electric vehicles, and has put in place a robust program focused on reducing CO2 emissions.