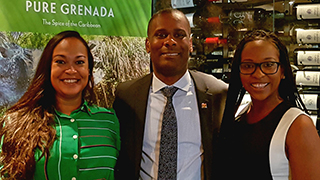 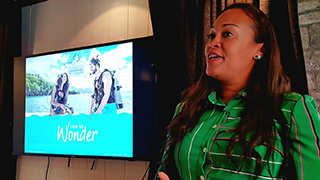 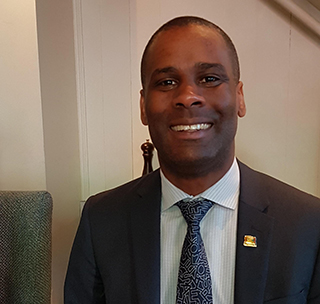 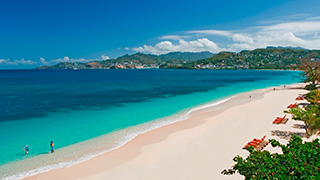 If Canada’s capital seemed a lot spicier Tuesday, the Grenada Tourism Authority (GTA) deserves the credit.  Sekou Stroude, Grenada’s Toronto-based Canadian sales director, and Renée Goodwin, a GTA marketing executive based in the capital city of St. George’s, were in town for travel trade meetings, including a media luncheon.  They were accompanied by Simone Cook of Zapwater Communications, the destination’s North American PR agency.

Grenada is the world’s top producer of mace and ranks second for nutmeg production, leading to its nickname: the Spice Island. (The country is actually made up of three islands, including Carriacou and Petite Martinique.)

“We’re proud that we’re an anti-mass market tourist destination,” Goodwin told the assembled group. “We really are off the beaten path.”  She highlighted the nation’s combination of spectacular natural environment -- from sand and sea to waterfalls and mountain forests -- and “well-balanced” cultural attractions.

Stroude added that Grenada lies south of the Caribbean hurricane belt, thus attracting visitors year-round. Canada is its third most important international market, after the U.S. and United Kingdom, and last year registered a 20% increase over 2017, the largest growth of any market.

Partly that’s attributable to increased airlift: AC introduced a third weekly flight to GND from YYZ for the winter season, and will reintroduce it this winter, and Sunwing has added the island to its sun offering too. There’s also service with AA through MIA.

Stroude made much of the country’s relatively small size. “You can drive around Grenada in three hours -- if you drive like me, more like two. You can get from a beach to a waterfall in the forest in 20 minutes.  With most resorts not more than 15 minutes or so from the airport, you don’t take forever on your commute, so you can take forever on the beach.”

Size also makes the place welcoming, safe, and community-oriented, he said: “With just 110,000 people, everyone knows everyone. The people are the real spice of Grenada. It’s not a strange thing to chat with a teller in a bank one day and then go off touring the island with that teller the next.”  (And, yes, Scotiabank has a Grenada branch.)

Yet there’s plenty to do, with more than 50 dive sites, including an underwater sculpture garden; 49 white sand beaches and others featuring black sand; 10 hikeable waterfalls, as well as crater lakes and sulphur springs; and a raft of festivals centred on everything from mangos and chocolate to sailing and Christmas caroling. Carnival season brings Jab Jab, a creature with horns coated in black oil, who leads a street party that begins at 3 a.m.

Prince Charles and Camilla visited Grenada about a month ago, so Stroude quipped, “I can truthfully say there’s accommodation for everyone from royalty to the budget-friendly.”  The royals stayed at the Spice Island Beach Resort, one of just a half-dozen AAA 5-diamond properties throughout the Caribbean.  But there are a lot of new properties to keep an eye on, including:

Sekou urged Open Jaw readers to register for the destination’s specialist program atwww.puregrenadaspecialist.com, and to log all destination sales to qualify for cash rewards and FAM trips. He also pitched the Next Stop Grenada Summer Campaign, available through 31OCT, with discount packages that include such goodies as room upgrades and complimentary massages and yoga classes.