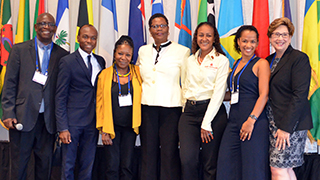 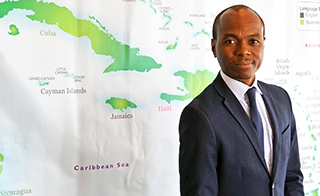 Hon. Dominic Fedee, Minister of Tourism for Saint Lucia and Chairman of the CTO Council of Ministers. 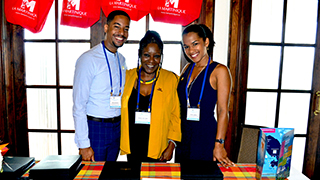 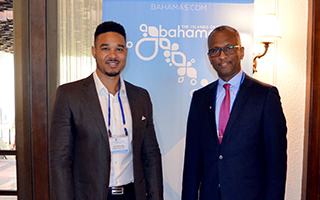 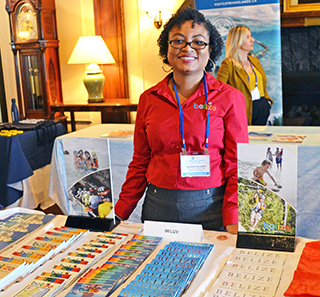 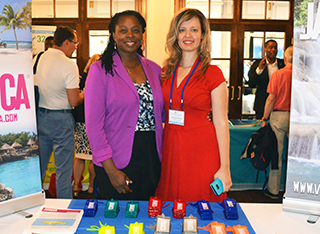 L-R: Raquel Queensborough, BDM with the Jamaica Tourist Board and Elaine Zlotkowski with Marshall Fenn.

A rising tide lifts all boats.

That was the overarching message proposed by Dominic Fedee, Chairman of the Caribbean Tourism Organization and Saint Lucia's Minister of Tourism, at the organization's Media Day in Toronto on 22AUG.

In his address, Fedee outlined a vision for the Caribbean that promotes collaboration and shared success, with the CTO a prime driver of both. But to bring that to fruition, Fedee says, the organization needs to start with a pointed restructuring.

"It's very clear to us that the organization needs to go into a different direction," said the Saint Lucian, who took up Chairmanship of the CTO several months ago. "The Caribbean is the world's most tourism-dependent economy in the world, yet there are issues that preclude the Caribbean from being effective in developing itself as a major tourism player."

Arrivals On The Up… But What Does That Mean?
On the surface, the Caribbean seems to be enjoying a strong year at the half-way point of 2019.

Fedee said the region welcomed 1.4 million Canadian visits in the first half of this year, and overall arrivals rose 12% to 9.1 million. When compared to the 4.4% global increase for tourism visits, he said it's a testament to just how strong Caribbean rebound has been post-2017 hurricanes.

However, sheer arrival numbers don't do a good job of capturing the big picture.

According to Fedee, there is a big data shortage in the Caribbean so, as part of its restructuring, the CTO is vowing to do a better job of managing, collecting and distributing statistics to measure how tourism contributes to the economic bottom-line of the Caribbean.

"The time has come for the CTO to lead that change. We need to measure our success beyond arrival performance numbers. Say there was a 25% bump in the increase of arrivals – it doesn't tell us how well we're doing," said Fedee. "The CTO must be the hub of tourism research in the Caribbean."

Developing “The Caribbean Brand”
Despite a rich history and a distinct cultural heritage of English, French, Spanish and Dutch influence across its 30 countries, the Caribbean still has much in common, says Fedee, and working towards a shared tourism-oriented goal will benefit all countries.

The CTO, as part of its restructuring, aims to play a more significant role in positioning the Caribbean as a tourism brand. Instead of islands competing by themselves, the CTO sees a vision where nation states work together to promote this "Caribbean brand" and raise each other up towards greater success.

Drawing on his experience promoting his own country, Saint Lucia, Fedee said the Caribbean, with all its potential and assets, "is perhaps the most neglected tourism brand in the world. We're all in this space, we're all small, we all have the same vision, the same challenges, the same focus, the same markets, so what we want to do is to combine our resources without undermining the national domestic efforts. By coming together, we can build a stronger, bigger, lethal force as a Caribbean brand."

Fedee told Open Jaw that it's too early to tell just how the initiative will be developed. The most important step at this time is getting leaders seated around the same table to discuss the challenges and the potential.

Secretary-General Appointment TBA
The position of Secretary-General, held for the past 17 years by Hugh Riley until his retirement in JUN, is due to be filled by the end of the year, said Fedee.

This will bring "fresh leadership to take the CTO in a different direction and an opportunity to leave their mark."