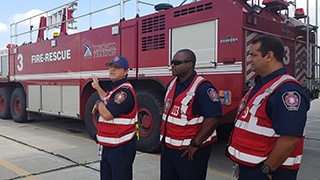 Fire & rescue are an important team at Pearson. 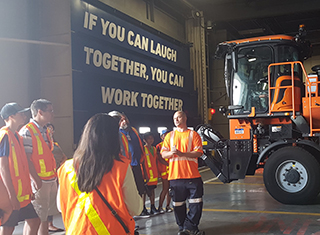 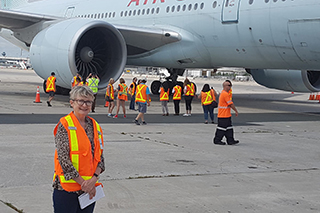 On The Town goes On The Tarmac!

No matter how blasé you are about flying, airports remain fascinating. But sadly, security issues mean many facilities are off limits to the public.

Helping satisfy our fascination with aviation, Toronto’s massive Pearson International Airport offers guided tarmac tours during which guests can get close up to snow-removal equipment, fire trucks and, yes, even airplanes.

The tours, led by Tours Specialist Russ Cruickshank – a 30 year employee at YYZ – attract a combination of aviation wonks, wide-eyed children and, on the day I participated, a group from Women in Aviation. The tours are by modern, air-conditioned bus and participants are allowed to get off at several stops.

First off is the Fire Hall, where gleaming multi-million dollar trucks await “the call.” “We have three minutes to get to a plane,” our host Marcel tells us, “And we are called out some six thousand times a year – usually for medical assistance.”

We were also lucky enough to meet a couple of canine handlers with Toga, an 85 pound bundle of energy and superior sniffing. “99% of our work is unattended bags – often because people don’t want to pay a second suitcase charge so stuff their belongings into one and leave the bag behind,” we learned.

Then we saw the vast hanger where the snow-removal equipment is stored.  Anyone who wrangles the white stuff on their own driveway would envy the massive ploughs, some with 50’ blades.

Then – lucky us – we got to get up close and personal with some massive jets, including an Air Canada 777 and Etihad’s A380.  Driving along the airfield apron we could count the colourful aircraft tails and appreciate the diversity of carriers YYZ serves:  some 60 in all. Bus stops allowed for photo ops.

Along the way, Russ told me that each tour is a bit different, depending on what’s happening at the airport and who’s on the tour. “One Amish group was completely fascinated by the snow-removal equipment.”

Some of YYZ’s stats are impressive. It represents 6.3% of Ontario’s entire GDP. There are 1,350 take-offs and landings a day. Pearson is home to the world’s largest centralized de-icing facility. And the airport spans some 5,000 acres.

These free tours are operated spring through fall and fill up very quickly – though a waitlist is taken. Next year’s tours, likely to number over 50, will open for reservations in March and start in May. You or your clients can sign up for the Toronto Pearson Airside Tours here.