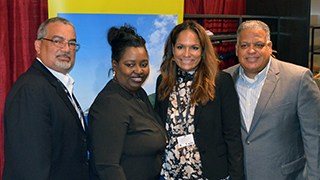 Members of the USVI Tourism Board and Economic Authority. 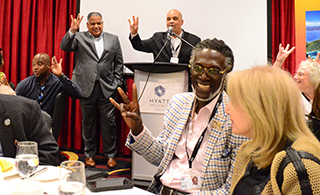 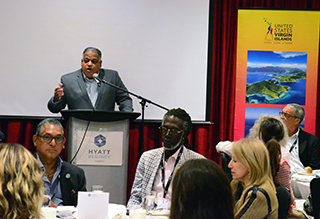 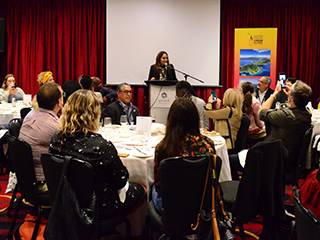 With the festivities of TIFF buzzing just outside the Hyatt on King Street, it was an opportune time for the U.S. Virgin Islands to announce its incentives offers for film makers, directors, producers and other investors at a media and partner luncheon on 5SEP.

Movies like Twilight and Shawshank Redemption were filmed there and, with its diverse topography of shipwrecks, waterfalls and mountains enabling it to masquerade as Korea, Greece, or Mexico, the opportunities for cinema on the island are endless.

The USVI believes more film and media projects will inspire tourists to choose the destination, and the tourism board is also hoping to make visiting a little easier for Canadians.

According to the USVI Commissioner of Tourism Joe Boschulte, the authority is working hard to bring back a direct flight between Toronto and the USVI with Air Canada. Currently, Canadian visitors connect through U.S. hubs Miami and Atlanta before continuing with a U.S. airline to the island.

However, as the Commissioner pointed out, the relationship between airlift and hotels is symbiotic, so getting accommodations fully up and running tops the to-do list.

The destination was savagely hit by Hurricanes Irma and Maria and 2017 and it has taken the island some time to rebuild. But there’s progress.

Most of the USVI’s biggest branded hotels remain closed as they continue the rehabilitation process, said the Commissioner, but several are just about ready to make their post-hurricane debut.

Bookings are already open for the Ritz Carlton St. Thomas, due to open for business this DEC, while in mid-to-late-2020, Frenchman’s Reef & Morning Star Marriott and the Divi Carina Bay are expected to reopen.

Most smaller hotels are fully operational, offering plenty of opportunity to enjoy establishments of a more intimate feel all across the island, said Boschulte -- especially in St. Croix, an up-and-coming destination in the USVI.

“One of the things you’re going to see from the USVI in our marketing efforts is that we’re going to take a different approach with highlighting St. Croix as our newest gem that needs to be shown to the world,” he said.

“Right now most people know St. Thomas and St. John, but we’re going to highlight St. Croix because what the Virgin Islands is really known for is our people, first and foremost, our culture and our cuisine, which you see in abundance in St. Croix.”

Cruise was the first USVI tourism-related industry to bounce back from the hurricanes, with ships returning less than three months after the storms and injecting vital dollars back into the island as it recovered. Today, cruise operations are at 90% when compared to pre-hurricane numbers.

The USVI is currently in negotiations to add a third port with two additional berths in St. Thomas that would be able to serve larger ships, like Royal Caribbean’s Oasis class. Right now St. Thomas can take five ships and St. Croix can handle two at a time.

St. Thomas is expected to hit 1.4 million cruise passengers this year -- a projection approximately 20% lower than in prior years, said Boschulte.

“I would probably say that the traffic after the hurricanes has not fully come back around yet. We are aggressively promoting to cruise lines the importance of having St. Thomas be a marquee spot,” said Boschulte.

Further, true to the old adage that if you build it, they will come, he said the additional berth space for large ships will certainly help attract cruising back to the island.