Air France Is Ready For Its Closeup At TIFF 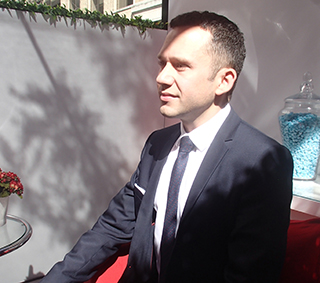 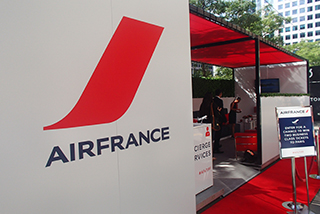 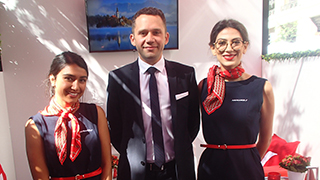 In its third year as the official airline sponsor of the Toronto International Film Festival (TIFF), Air France switched things up at its pop-up venue.

The first two years featured a Paris bistro theme, but this year the space mimicked a mini premium lounge, with coffee, non-alcoholic sparkling and the chance to sample exquisite little French patisserie – as served in the Air France business class seats on flights from Canada to France.

This is the second TIFF for Etchebehere, who took on the role in AUG 2018. He says it’s been an exciting year, with lots of enhancements to service from Canada and a big investment in this market.

This summer AF offered 10 weekly flights from YYZ-CDG, up from daily last year. And there’s big news for Toronto this fall, with the destination chosen by Air France as the first long-haul route for the brand-new A350-900. The inaugural flight is 28OCT.

Etchebehere says the consistency of service of AF flights from Canada improved significantly this year. “In summer 2018 we had different planes and different cabins on our Canada routes. This year it’s consistent, with a drastically improved inflight product and brand-new cabins.

He says Canadian demand remains strong, with good traffic on the relatively new YVR-CDG route and 7% more seats from Montreal, in addition to the “breakthrough” of 10 weekly YYZ flights in peak season.

With 13 years with Air France, beginning as a business analyst in 2006, Etchebehere has quickly moved up the ranks. He was General Manager, Mexico, for nearly four years before moving to Canada. He’s enthusiastic about the direction of the company under the leadership of AK/KL CEO Ben Smith, a Canadian and former AC COO.

“I think he’s done a fantastic and really impressive job in just one year,” Etchebehere said. “He has brought modern, transparent, direct ways of doing business and new platforms for interaction with staff based on listening and sharing. It has freed up a lot of energy in the company.”

Etchebehere is happy to be part of a time of great change at the French/Dutch airline giant. He points to the arrival of Anne Rigail as the first female CEO at Air France, who he says has brought a lot of passion and a customer-centric approach to the role.

He’s also keen to talk about sustainability efforts by the airline, including the elimination of 210 million single-use plastic items by the end of 2019 and the introduction of fuel-efficient A220s and A350s.