5 Cool Things To Do In Germany 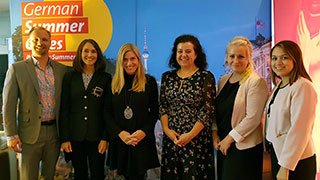 The delegation included reps from Franconia, Baden-Baden, Frankfurt and Saxony-Anhalt and Bavaria. 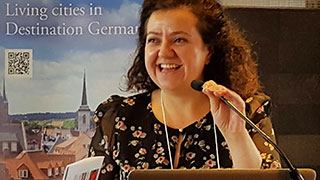 Julia Dywelski of the GNTO

Cathedrals, museums, Black Forest hiking trails and the Berlin Wall (or to be precise, the former Berlin Wall).  They’re just the tip of the iceberg when it comes to touring Germany. To give a group of Toronto writers an insight into other options, a team of five tourism promoters visited Toronto this week to dish the goods on what’s great about Germany.

Their presentations were wide ranging, but there are some of the coolest things that your clients may find tempting:

l) Visit a Christmas Market – or two (there are literally thousands across Germany). Offered in the four weeks leading up to Christmas, these outdoor markets date back to the middle ages.  Today they score full points for their fairy-tale prettiness and respect for tradition. Stroll between booths and huts, usually set up in the town square, admire the Nativity Scene, purchase traditional festive season gingerbread and sweets – and stave off the cold with a cup of hot mulled wine. The town of Baden-Baden goes one further by keeping its market open to 6JAN!

2) Listen to the music. There’s always a festival to be had in Germany and next year will be no exception as the country marks the 250th birthday of Beethoven, “The most frequently performed of the classical composers,” Julia Dywelski of the German National Tourist Office’s Canadian office told us. Classically-inclined clients will also want to soak up the Haydn Festival in Schleswig-Holstein, the Wagner Festival in Bayreuth and pay a visit to Hamburg’s new Philharmonic Hall. Sounds a bit stuffy?  Good news: Frankfurt is opening a Museum of Techno Music next year.

3) Go museum-hopping – on an island. Berlin’s Museum Island has five museums with displays ranging from classical antiquity and Islamic art to impressionist paintings, all included in one handy price.

4) Check out the Bauhaus. If you have a kitchen, you know about Bauhaus. The movement to streamline architecture, furniture and countless areas of applied design was founded in Germany in 1920. This year of the 100th anniversary celebrations is obviously drawing to a close, but self-guided and organized tours are always available. (Before Bauhaus, kitchens comprised individual components, the sink separate from the counter etc. Bauhaus designers “invented” the built-in kitchen.)

5) Go for a drive. Visit Stuttgart, “The Car City” and home to Mercedes Benz and the Porsche Museum. Rent a Porsche yourself and try out those famous autobahns, or highways. In in Munich admire the sleek lines of the stunning collection at BMW World. Or explore at your own pace along southern Germany’s Romantic Road, the country’s best-known and most popular holiday tours where castles and Medieval towns abound (hiking and cycling versions available).