Virtuosity and musical genius can be found in every corner of Vienna any year, but perhaps even more so in 2020 as the city celebrates 250 years of Beethoven.

"We are updating the industry on 2020. For the Vienna Tourist Board, it's about celebrating the 250th birthday of Beethoven and what the city is doing to celebrate this master composer," said Armando Mendonca of AMPM, the Vienna rep in Canada. 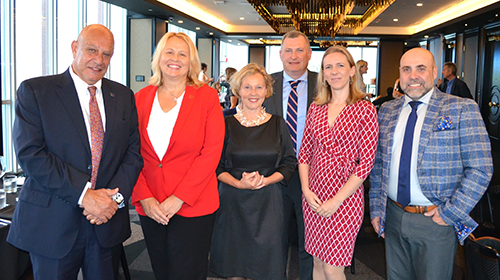 As soon as you touch down in Vienna, you are in the heart of Europe, with major European destinations a short two-hour flight away, highlighted Ursula Pusch, Manager of the Americas Aviation Development with the Vienna International Airport. 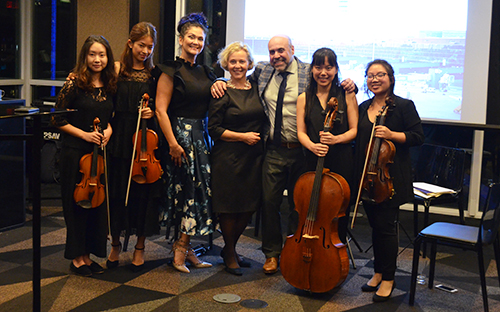 Students with the Glenn Gould Conservatory of Music performed classical compositions
throughout the evening, closing the evening out with an adagio from Beethoven's
String Quartet Op. 18, No.1, published in 1801. Laura Daubney (third from left)
performed a dramatic reading of the iconic love letter “Ever Thine, Ever Mine, Ever Ours."

This year Air Canada launched direct service between Toronto and Vienna, operating daily in the summer and 5X weekly throughout the winter season.

The AC flight, aboard a Boeing 787 Dreamliner, complements an existing direct route with Austrian Airlines from Montreal.

AC's Sabina Steffensen noted that Boeing's Dreamliner, which features Signature, Premium Economy and Economy classes, has the largest windows of any airplane to date and can be dimmed with the touch of a button – a design that ditches the pull-down plastic shade. 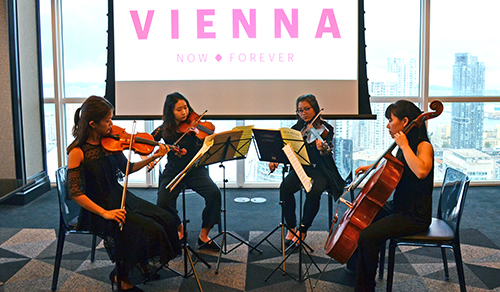 Students with the Glenn Gould Conservatory of Music.

Last year, a record 27 million passengers landed in VIE, a 10.8% increase over the previous year.

Thanks to Air Canada's added flight, the "Music Capital of the World" has already seen a 16% increase in Canadians flying to the destination in the first six months of the year. In 2018, 120,396 Canadians flew to Austria, an 8% increase over the previous year.

Serving 205 destinations in 71 countries, VIE is a major hub connecting with countries all throughout Europe, including eight that can only be reached via Vienna and not via Frankfurt, Munich or Zurich.

High speed rail travel is also easily accessible out of VIE – the station is located just a five-minute walk from the arrivals terminal.

"Vienna is more accessible out of Canada now, so it's a city you can consider flying into and adding on other cities. It's an affordable city, and the proximity to other destinations makes it a great destination to combine with other places," says Mendonca.

Austrian Airlines' Sherif reminded agents that they can visit lufthansaexperts.com for up to date information about Lufthansa, discounts and contests.

For 2020, the Vienna Tourist Board is spotlighting artists and institutions that help Vienna maintain its ‘music capital’ status. Even going back as far as the 1800s, Vienna was recognized as a special place for music, as brilliant composer Ludwig van Beethoven chose this city as his main place of residence.

From the Haus der Musik and the State Opera house, Vienna Boys Choir and Belvedere Palace Museum, there are countless ways to both hear and see music in Vienna. 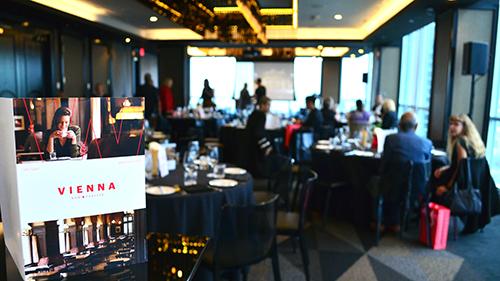 The event was held at the Bisha Hotel in downtown Toronto.

Internationally acclaimed musicians such as Billy Joel, Hans Zimmer, Yuja Wang and Joshua Bell all extol the musical virtues of the Austrian capital.

"I was always fascinated with Vienna because it was the city of Beethoven. He lived and composed in so many places in that city. You could look at the top of a building and see a little violin coming off the balcony. You don't see that in other cities. The music is inherent in the architecture," said American singer-songwriter Billy Joel in a promotional video displayed at the event. "Nashville is music city in U.S.A. In Europe, music city is Vienna."

Click here to learn what some of these music aficionados have to say about the city.

But while the acoustics are an attraction – especially as the maestro Beethoven celebrates his 250th birthday -- there's a lot more in store for 2020, with wine tourism (Vienna has 23 wine districts), winter markets, imposing imperial architecture, outstanding culinary traditions and aromatic coffeehouses.