Lufthansa Group carries roughly 1 million passengers a year across the Atlantic between Canada and its hubs in Europe, making this market an important one for the massive company that operates the Lufthansa, Swiss and Austrian network carriers and the Eurowings and Brussels Airlines LCCs.

In Toronto for a meeting with JV partners AC and UA to discuss a multi-hub strategy, Heike Birlenbach, SVP of Sales for Lufthansa Hub Airlines & COO and Hans DeHaan, Director, Lufthansa Group Canada met with media to share the future direction of the company. 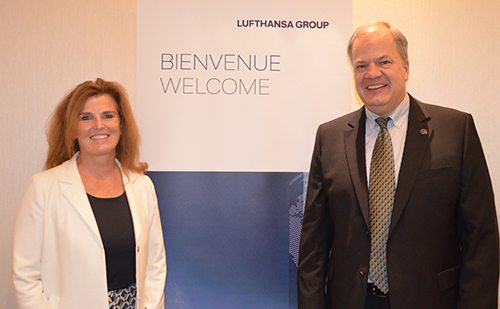 As one of the top 10 countries in the world served by Lufthansa Group, Birlenbach said the Canadian market is of "utmost importance." In summer 2020, Lufthansa Group will fly 76 frequencies per week between Europe and Canada.

As OJ reported last month, LH will service five destinations in Canada with the addition of a YOW-FRA route running from 16MAY, 2020 to 24OCT, 2020 using Airbus A340-300 equipment. Lufthansa is also adding a YUL-BRU flight (allowing Air Canada to take over its current YYZ-BRU service).

Since Lufthansa Group shook up the world of airline distribution in 2015 by adding a fee on GDS bookings (which Birlenbach called “a success”), it now rakes in roughly 50% of its tickets through direct connections.

Today, they have connected approximately 3,000 NDC partner agencies around the world.

"We are developing NDC because it's another way of distribution and it meets the needs of a customer, but the role of a travel agent is also equally important. That has not changed," said de Haan. "That's still one of our big distribution channels that we use and it's going to continue like that, but there are other channels where we have to be active. We are 100% committed to the agents."

With a focus on improving the end-to-end customer experience, Lufthansa is laying down a $2.5 billion investment in its fleet, products and services over a six-year period.

The Boeing 777x will be the next intercontinental aircraft entering the LH Group, with an earliest arrival date expected of 2021.

"The 777x will showcase all the new products that we will offer, and these will be the products of the future for all the other airlines in Lufthansa Group," said Birlenbach. 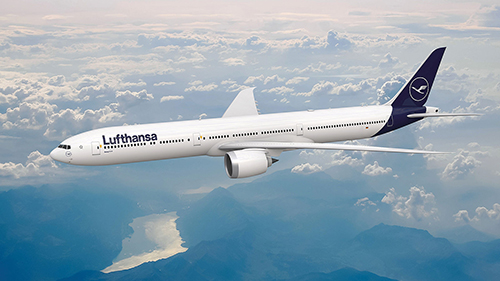 The Boeing 777x is the newest intercontinental aircraft coming into Lufthansa Group.
It's expected to enter into service in 2021 and will service several Canadian routes.

The 777x will showcase a new Business class with six or seven different seating options, a Premium Economy class that comes with shell-style seats that slide forward instead of hinging backward, a new Economy Plus category (regular Economy class with more legroom) and, of course, the Economy class.

"[Premium Economy] is the best class that we have. There is a big demand from business travellers that don't want to be in Business class, but also more and more from leisure travellers that want more flexibility and better service," said Birlenbach.

The new categories of the Business class are still being worked out, but Birlenbach said there will be several different options travellers can choose from based on their travel style and purpose, with varying degrees of personal space and privacy options.

We'll see the 777x in the Canadian market, as the two-engine aircraft model replaces the 747s currently used out of YVR and YYZ.