ET Debuts Airbus A350 At YYZ, Hopes To Launch Out Of YUL

There was cause for celebration for Ethiopian Airlines on Sunday morning at Toronto Pearson as the airline's Airbus A350-900 XWB made its debut in Toronto, and Open Jaw was on hand to get an inside look. 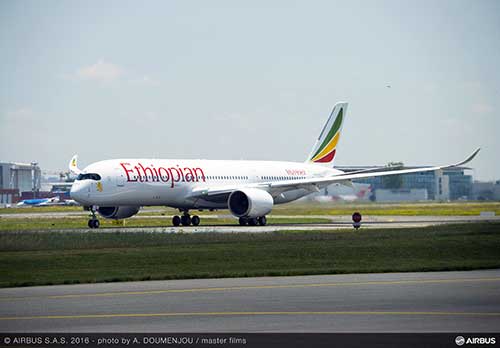 Outfitted with 30 business class and 313 economy class seats, the A350 will operate 5x weekly flights between YYZ-ADD during peak season.

The plane goes direct eastbound on a 12.5-hour flight between YYZ-ADD, but makes a 45- to 60-minute refuel stop in DUB when flying between ADD-YYZ, bringing total flight time to around 15 hours. 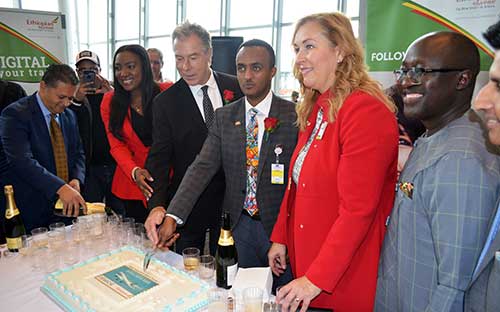 According to Samson Arega, ET's Canada Country Manager, the airline hopes to increase to daily service out of YYZ, a destination it has served for seven years, and also launch flights out of YUL next year.

There are many onboard and operational features that make the A350 a comfortable and versatile aircraft for ET, Open Jaw was told. 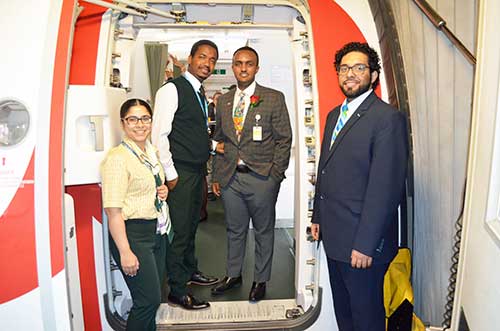 Arega (third from left) with ET staff at the aircraft door.

"We are excited about the aircraft because it creates an enhanced customer experience, is retrofitted with very fast broadband satellite wi-fi, and the cabin noise is less compared to the other fleet population that we have," Arega told OJ.

"As a result, jetlag is minimized for our customers. The carbon emissions are also 25% less, so it is an environmentally friendly aircraft and contributes to the green economy. It consumes less fuel, so there are savings for the airline, as well." 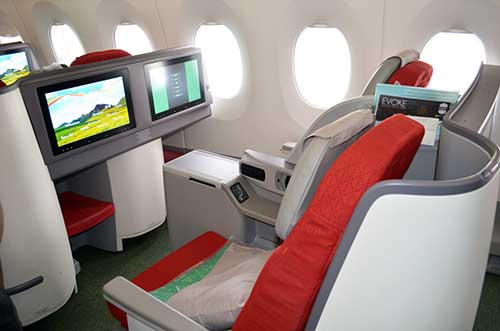 In economy class, set up in a 3-3-3 configuration, each seat also features its own seatback screen.

ET's Airbus A350 also has significant advantages in reaching Bole International Airport, says Arega. At an altitude of 2,400 metres above sea level, ADD is "a very challenging airport for any type of aircraft engines," and the A350 has a unique capability to take off from that altitude carrying its maximum weight, says Arega.

Ethiopian Airlines, already the largest carrier in Africa, also became the first airline on the continent to operate the A350. 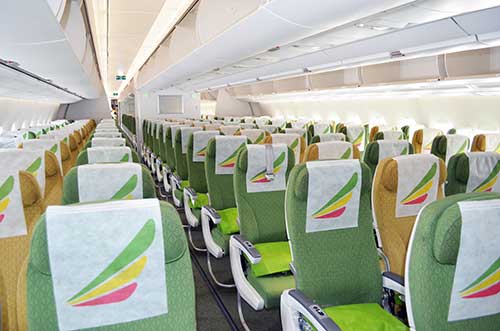 "If we didn't have Air Canada, we wouldn't be able to take advantage of markets like Vancouver, Winnipeg and the East Coast. We have no real interest in flying into places like Calgary because we have Air Canada, and they'll be the first carrier," said Timmins. "But saying that, they're already talking about daily into Toronto next year and then Montreal, as well. We're no longer the two or three flight airline per week. This is just another benchmark that we've hit with the Airbus A350." 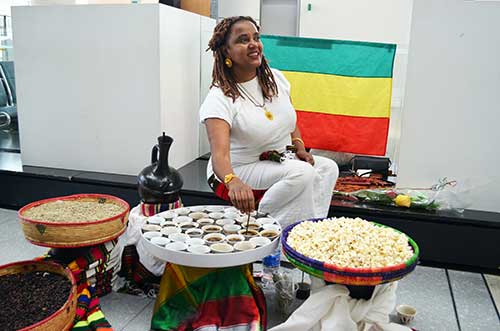 Guests were treated to Ethiopian coffee and a performance of traditional dance and music.

According to Timmins, 70% of ET pax are transferring via ADD to other destinations in Africa, and 30% are travelling to Ethiopia for FIT. He adds that the Addis Ababa airport has overtaken Dubai International Airport as the largest African hub.

Click here to view a virtual tour of ET's Airbus A350.