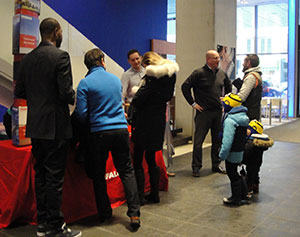 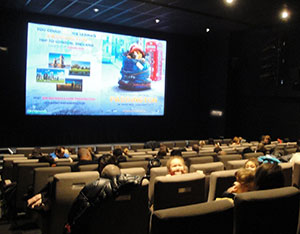 Anxious movie goers waiting for the show to start 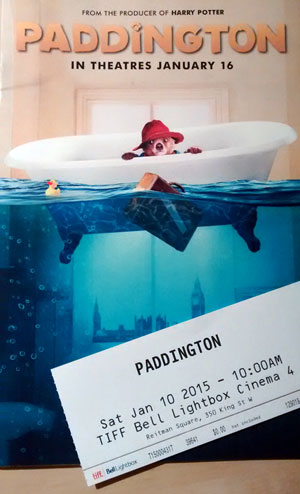 What a treat to be whisked away to Darkest Peru on a particularly bone chilling day in deep winter. OK, so Peru happened to be the opening scene on the silver screen at the TIFF Bell Lightbox Cinema 4 in downtown Toronto, but this is where life began for a curious and courteous bear who would later be known as Paddington. After disaster strikes, young Paddington courageously embarks on an England-bound adventure in search of a new home.

“There are a lot of timeless things that we touch on year in and year out, and a lot of them tend to come from Britain”, said Doug Patterson, President of Trafalgar Canada during a brief introduction before the start of the movie. “Two stand out for me, one of which is the Rolling Stones and the other is Paddington Bear.” Patterson went on to share that he received a plush Bear in his youth and years later gifted a Paddington to his young daughter.

Having been the subject of many books and television shows since 1956, Paddington has finally come to the big screen for the very 1st time and Trafalgar, in partnership with eOne Films, took advantage of the occasion to invite guests from the travel community and their families to an exclusive screening this past weekend. “It’s a chance to bring to life the destination [Britain] and Paddington which ties in to what Trafalgar offers as an experience,” said Patterson. “One of the things we touch on with our slogan is that you 'see the world from the inside'. That is truly what we're about and our Family Experiences product is what that does. We bring that destination to life." Patterson also mentioned that it is typically the case in many family vacations to see children going one way and parents going another. “Trafalgar allows the chance to experience destinations collectively as a family."

Before the lights dimmed the theatre was abuzz with excitement. Parents divvied up bags of popcorn while kids got cozy in their seats. For some little ones (including my own) this was their 1st time being in an actual movie theatre, making the experience all the more special.

As the movie progressed there were countless moments of hilarious blunders and nail biting adventure as Paddington did his best to negotiate his way through a strange new land. Themes of family played heavily throughout and by the end it was heartwarming to see that Paddington eventually did find a home and discovered that his new found family needed him as much as he needed them.

Judging from the smiles and applause from the audience at the end of the movie, it's safe to say that this was indeed a great family experience.

A few lucky audience members were awarded door prizes that included goodies courtesy of Trafalgar and HarperCollins. And you are invited to click this link for your own chance to win a trip to London with Trafalgar.