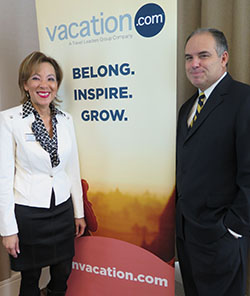 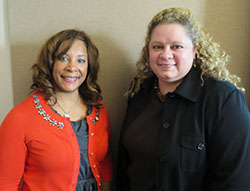 2015 is starting off just fine, say the folks at Vacation.com. And can you blame them?

With over 700 agency affiliates across Canada (up 85 during last year alone), the consortium appears to be on a roll. While keeping its name, Cruise Holidays has been integrated under the V.com umbrella and independent agent program Nexion, which is relatively new in Canada, now has 100 members.

In all, Vacation.com now numbers over 5,500 member retailers with over 21,000 travel advisors across North America.
At a recent get together, Stephen McGillivray Chief Marketing Officer for V.com’s parent company Travel Leaders Group and V.com’s Chief Operating Officer Tiffany Glass, joined the organization’s V,P. for Canada Christine James for their annual state-of-the-union presentation.

2015 is off to a strong start for a number of reasons, according to McGillivray: lower energy prices are putting more disposable dollars into consumers’ pockets; the strength of the greenback and the CAD against the Euro as well as an uptick in exotic travel such as safaris.

95% of V.com’s Canadian members report that bookings are on a par year over year – if not higher.

The next big event for the group will be its annual conference taking place April 24th thru May 2nd on board the Royal Caribbean’s Quantum of the Seas where V.com executives hope to engage as many captive agents as possible in a significant marketing thrust for 2015: Agent Snapshot. This new B-to-C initiative features online advisor bios outlining specialties, countries visited and areas of expertise, while allowing consumers to connect by requesting an expertise or geographic location of the agent. Some 500 agents have completed their bios since the initiative was announced in June of last year. But those on board Quantum will get a leg up in the form of a team of professional writers and photographers to help them complete their entries.

“We don’t sell travel. We sell travel agents,” McGillivray told the group. Such programs are sure to only increase the ties that bind Vacation.com and its members!