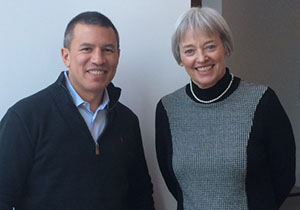 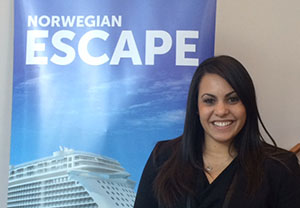 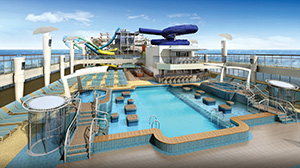 Norwegian Escape's rendering of the main pool and WaterPark slides 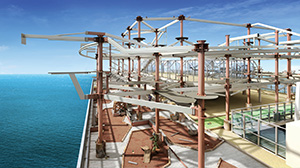 Escape's Sports Complex including the Plank

“I would give you a business card, but I don’t have any left!” apologizes Andy Stuart, Norwegian Cruise Line’s Executive Vice President of Global Sales & Passenger Services. It’s not at all surprising. With Norwegian’s new push into the Canadian market – and the launch of their newest and biggest-ever venture: the Norwegian Escape - he’s been handing cards out constantly.

That’s why we’re here. A small group of travel types have gathered in a sunny corner of the Trios Bistro at the Marriott Eaton Centre to enjoy a yummy lunch and learn more about the 4,200 passenger Norwegian Escape, officially setting sail on November 14th of this year.

The massive new ship will homeport year-round at PortMiami, and will sail an exclusively Eastern Caribbean itinerary, with all sorts of new facilities and features, entertainment, dining and special treats for travellers of all ages.

And judging by the smiles and nods around the table, even this travel industry crowd is impressed by The Haven – a “club” area for clientele willing to pay more for an exclusive experience. And, with a private pool, butlers, private dining and even priority tenders, The Haven isn’t going to disappoint even the most discerning clientele. I sip my wine and try to pretend I’m lounging by a private pool, cruising just off St. Thomas. But, with our view of the frozen windswept Trinity Square, it just isn’t working.

The Haven isn’t the only new thing Andy wants to share with us – the Escape also has the “Freestyle Cruising” concept; allowing for flexible dining and entertainment in smaller venues, instead of the 2 seating dining and enormous shows of traditional cruises.

Families won’t be left out: the ship has family staterooms, an extra area for small children, a nursery for children 6 months to 2 years - and a huge, state-of-the-art water play area that Andy says “any land-based park would be proud of!” And with a huge selection of new kid (and adult) –friendly dining options this really is a superb holiday idea for a family.

The thought of sunning myself on a massive cruise ship seems pretty remote as we watch people hurry past in the freezing Canadian winter. And that’s what Norwegian is banking on. They want us to escape the cold – and they’re investing in this market to prove it. In the next few months they’re expanding their Canadian sales force by 40% - adding a Director of Sales, and a new Business Development Manager to their team of 4.

This Canadian expansion is also thinking ahead: by 2019, Norwegian’s capacity will have doubled overall. Canada is an important part of this puzzle – one that Andy admits hasn’t received enough focus in the past.

And then, as I wipe the last crumbs of my dessert from my mouth, it occurs to me why Andy Stuart has really run out of business cards. It’s not just the fantastic new Escape, or Norwegian’s major expansion, or their investment in the North American market… it’s because there are 2 fabulous-sounding positions on offer!