Post-‘Revolution’ Celebrity Summit Is A Great Ship Made Better

AmaMagna -- Magnificent Indeed!
She’s a beauty and a game-changer for river cruising 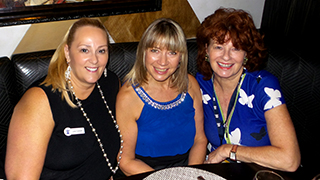 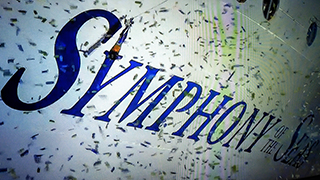 The bottle breaks as Symphony of the Seas is named. 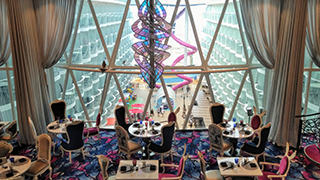 Wonderland Restaurant with a view out to Boardwalk 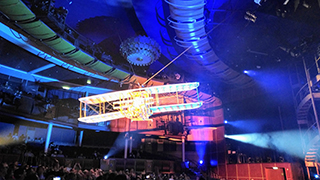 Flight – The Grand Finale with a replica plane “flying” over the audience. 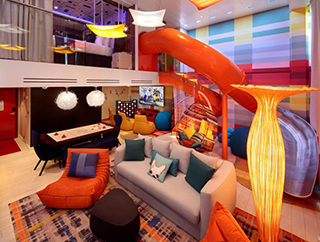 Royal Caribbean continues to lead in so many ways in mainstream cruising; it has the formula down right and each ship and new class of vessel is impressive – so much so that I can barely wait for ‘Icon Class’ to be unveiled.

What came through loud and clear during the short naming ceremony cruise on Royal’s latest mega-ship Symphony of the Seas is that the focus is very much on families. The first-ever cruise ship ‘godfamily’ christened the ship, but the family focus is hammered home via theme park slides and water parks a plenty -- and, most emphatically, it’s ALL about entertainment.

More about that later. But I was also very impressed with the quality of cuisine and service. Very good food is served, with a great deal of care and attention, in 20 different venues -- 9 complimentary -- and with more than 300 menu choices. I loved Chops Grille, Jamie’s and Wonderland is more than spectacular. New choices on Symphony include casual Mexican at El Loco Fresh and Hooked for seafood on the upper level of the Solarium space.  And the service – this is a well-oiled machine with a diligent and very competent staff – and Royal has cleverly honed everything they deliver to an inch of its life.

So what’s new about this fourth-in-class ship? It’s almost “old news” now about those fabulous seven ‘neighbourhoods’ that debuted a mere nine years ago on Oasis of the Seas. We have become used to Central Park, the Boardwalk, the Royal Promenade and the various other districts. They remain great, but, well, we’re used to them. So how does RCI continue to raise the bar and provide one of the best vacations around – and not just at sea?

They do this by  pushing boundaries and never ceasing to create. And this is forefront with the huge range of entertainment offered on a 7-day cruise. I made it to three of the four marquee shows on our cruise – missing only the version of Hairspray which was apparently packed for both shows.

I saw Flight – Dare to Dream, in the Royal Theater and enjoyed a performance worthy of Broadway, never mind on a ship. It was remarkable, powerful, emotional and so much more. With a big cast, this multi-million dollar original Royal Caribbean production begins in the future, rocketing the audience to Mars and then continues on a backwards-in-time journey from one aerospace first to the next. The grand finale took the audience back to the Wright Brothers’ first manned flight in a stunning dramatization. The staging, the props, the costumes, the songs, the performers – all were exceptional.

The AquaTheater on the aft deck of Boardwalk is a favourite and especially when at sea under the light of a silvery moon. HiRO, a Japanese themed show full of acrobats, high-wire walkers, extreme athletes and divers is hard to describe. It’s a non-stop, in-your-face production with heart-stopping moments. The talented performers work their hearts out to deliver a very powerful show. It offers cutting-edge technology and outstanding choreography. It’s a must-see for your clients.

Nick Weir is the charismatic and very talented SVP of Entertainment at Royal and since his arrival about 3 years ago, it is palpable how the onboard shows, delivery and creativity has evolved, improved and literally blown every other cruise line’s offerings out of the water. This man is Mr. Showbiz and Royal is the beneficiary. These in-house productions are so good – it’s mind-boggling.

The ice rink in Studio B was the venue for 1977 – a whimsical fantasy of time travel mixed in with the theft of valuable jewels from the Tower of London. At times the storyline seemed somewhat improbable but one could ignore that when faced with the sheer perfection of the ice skaters and the many special effects that blew the audience’s combined minds. Costumes were stunning and the special effects – for example the 48 tiny drones literally “dancing” in unison to open the show -- set the stage for what was to come.  To then see the ice surface literally become an ocean, with penguins diving and a humpback whale appearing and slowly swimming through the rink – well!

What struck me the most is that RCI is now firmly ensconced as a family cruise line – there is so much for every member of the family – whether multi-gen or just parents and kids. The ultimate Family Suite costs a pretty penny but is basically sold out for months and one lucky family will enjoy it over the festive season for a mere US$85K. That’s crazy in a way, but it shows you how valuable such accommodations can be and how much people are willing to pay.

Personally I preferred the 4-bedroom, 4-bathroom villa suite.  It is gorgeous, calm and perfect for 8 adults or a larger family with kids, to share. These kind of accommodations come with a beverage package included, the services of a Royal Genie and more and  they are in Suite Class so have their own private restaurant – Coastal Kitchen. It appears the plan is to offer more such accommodations but at a slightly lower price so more families can enjoy this kind of experience.

Symphony of the Seas delivers, in every way and in the most spectacular fashion. There’s something for practically everyone and with the Perfect Day at Coco Cay coming next spring – Royal Caribbean steps up again to offer its unique take on cruise vacations with a remarkable private island experience as well. An internationally-known luxury cruise expert, Vanessa is publisher and editor of Cruise and Travel Lifestyles magazine. She appears with Nina on the bi-monthly video Cruise Factor.